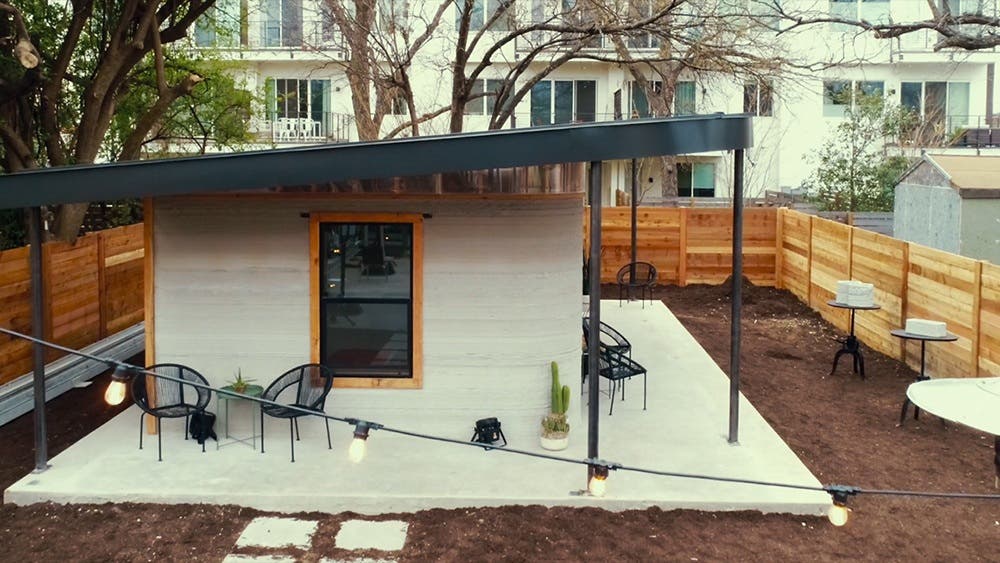 The popular Austin-based conference and festival, SXSW, is known for being a hotbed of innovative products and ideas. This year, one of these ideas was a tiny house that was built in about 24 hours. Not by a dozen strong men, but by a 3D printer.

The 650 square foot New Story printed home made its debut at the SXSW festival. Technology startup ICON is the brainchild behind the New Story, a 650 square foot tiny house. Printed with a large 3D printer, called the Vulcan, the house is made of concrete poured into a mold created by a software program. The house includes a living room, kitchen, bedroom, bathroom and a porch that covers the entire structure. The cement comes out in layers and has the texture of an earth-built or adobe home. ICON has already build more conventional cement homes in Bolivia, Mexico, El Salvador and Haiti. The company has partnered with communities in needy areas to hire local labor and purchase local materials rather than shipping the supplies into the areas. Now, ICON is planning to raise $600,000 to fund a planned community in El Salvador. The community will contain over 100 of the New Story homes. The cost effective printing technique can keep the cost of each home to around $10,000.

Vulcan, the 3D cement printer, can print out a home in about 24 hours. “Conventional construction methods have many baked-in drawbacks and problems that we’ve taken for granted for so long that we forgot how to imagine any alternative,” says Jason Ballard, co-founder of ICON. “With 3D printing, you not only have a continuous thermal envelope, high thermal mass, and near zero-waste, but you also have speed, a much broader design palette, next-level resiliency, and the possibility of a quantum leap in affordability. This isn’t 10% better, it’s 10 times better.”

ICON, creator of New Story, is planning a community in El Salvador. Vulcan is a portable printer designed to function with very little waste and with limited power, water and labor. It can build houses from about 600 to 800 square feet. If the concept becomes more widely accepted, and more Vulcan printers can be built, you soon might be able to print your own 3D tiny home. This is amazing 10000 3D tiny house. Because the printer is a good technique for the use. We have to know that tiny house is a creative house.

3D printing is the future. I would love to visit a 3D printed house in the future just to see how it feels compared to no printed homes. Keep the great articles coming

Am I dreaming???? An entire tiny house created by a 3D printer in just 24 hours!!!! This is a great technological leap and could pave way for bigger houses to be built through this printing technology. Surely we are living in very interesting times!

By 10000$ if you know how to build a 3d printed house then it’s really a great thing. I believe that this is really impressive. I appreciate the approach. Well penned.

ICON has already build more conventional cement homes in Bolivia, Mexico, El Salvador and Haiti. The company has partnered with communities in needy areas to hire local labor and purchase local materials rather than shipping the supplies into the areas.

The term “3d printing” has created a stir in the 21st century. With the new advanced technology, ICON has innovated the next generation construction 3d printer. It is cost-effective and requires less time.

the 3D-printed house would be made of cement and take up to one day to be printed by large 3D robots. Best of all, the homes would cost just $10,000. And ICON hopes that eventually, it can bring the cost of homes down to $4,000

Making a tiny house using 3D printer is very expansive. Cost must be less otherwise it is not useful for everyone. I hope price will reduce soon. I am also working on it.

It’s an amazing technology. Now people wouldn’t have to wait months or years for there house. 3D printed houses are more affordable and fast.

This article on this new-age technology is nothing short of fascinating and amazing. The technology is also cost-effective and time-saving as it builds the house in an unimaginable time with precision.

This is the Supplies On The Fly company profile.

Now that is an affordable house. – When Food is Political - January 4, 2022 Reply

[…] A $10K house with a  living room, kitchen, bedroom, and bathroom. Okay, so you have to furnish it with appliances. plumbing fixtures, and furniture. It takes 24 hours to complete! Sure, the weather has to be good, etc., but for concrete walls, you cannot beat this deal. https://tinyhouseblog.com/humanitarian/print-your-own-10000-3d-tiny-house/ […]