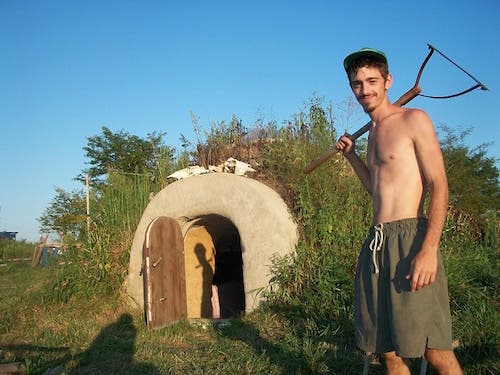 Kyle Yoder, self-taught builder extraordinaire, uses science and ingenuity to turn others’ trash into his own treasure.

Kyle’s visionary experiment, the Gnome Dome, is arguably the most unique abode at Dancing Rabbit Eco-village. Orphaned by its prior owner and condemned to destruction due to a gnarly mold infestation, the Dome was nearly demolished several years ago, but Kyle recognized great potential in the structure and convinced the village to let him solve its problems. Now it stands as a testament to how, with a little tender loving care, even the most humble of experimental tiny houses can evolve to become a beautiful marriage of mad science and aesthetic brilliance. The Dome’s walls, resting on a gravel foundation, are comprised of polypropylene bags that are filled with a road base mixture of gravel and sand. These bags are laid in courses atop one another like bricks, the highest courses being laid in ever tightening concentric rings to form a vaulted dome. The Gnome Dome might be more accurately described as an igloo in shape, with an arched, tunnel-like foyer at the threshold that was erected with the aid of a temporary wooden frame. All told, the inside measures a scant 80 square feet, making it an excellent model of a cozy hermitage. In future years, Kyle will terrace the outside of the building and cover it with earth to be planted as a living roof. The structure is made almost entirely with recycled and reclaimed materials, giving it an out-of-pocket expense of only $3000, not counting the sweat equity Kyle has invested throughout the construction process to elevate mundane constituent parts into stunning works of art. When Kyle inherited the building it was prone to mold growth due to moisture wicking up and into the building from the soil surrounding and underlying the foundation, so he set out to make a few necessary improvements. First he installed an interior moisture barrier, which he then overlaid with rigid foam insulation. Due to the curvaceous contours of the building, there were no straight lines or right angles to work with. When it came time to apply the finished façade of wainscoting, each piece had to be specially measured and cut. Above the wainscoting, where the walls blend seamlessly with the domed ceiling, he applied earthen plaster and a white lime wash to maximize the light-reflective properties of the surface. The final key to solving the interior moister problem for the Gnome Dome was in the ventilation mechanism Kyle chose to use. His custom masonry mass-heater has a dual purpose chimney – in winter it works as you would expect of a chimney, but in the summer in can be fitted with an electric fan that will draw air in through the subfloor intake and send it out through the chimney flue, effectively cooling the house even on the hottest summer days. In winter, with the aid of a hand-operated flue-damper plate, hot air can be directed through a secondary chimney pathway that circuits underneath the bed. This warms the space evenly and maximally exploits heat energy from each wood fire that is burned to heat the structure, before gasses are exhausted outside. A two-ply acrylic dome is the building’s crown jewel, which acts as a skylight at all times of year. The windows are made of corrugated plastic conduit used in road culverts, which were inlaid amongst the earth bags in the early days of construction. The front door is a one-of-a-kind feature as well, crafted by a local carpenter from recycled timber and outfitted with an iron latch and hinges hand-forged by a neighboring blacksmith. “One of my favorite things about the building is the dome,” Kyle told me with a wry smile, “but it works at odds with the principles of passive solar design. Because the dome is inset in the center of the roof, it’s too high to let in sunlight during the winter, and in the summertime the dome acts as a direct segue for the noonday sun. It does the opposite of what I want it to do, but it’s beautiful, and a crucial source of light in an otherwise dim space.” Now that he and his wife Sarah are married, Kyle makes his residence elsewhere while a larger homestead is under construction, but he rents out the Dome to eco-tourists who come to Dancing Rabbit Eco-village every year in order to learn how to live a more sustainable life as awareness grows of anthropogenic climate disruption. One strategy used by community members to reduce their ecological impact is to share resources like cooking and bathing facilities, for which reason the Gnome Dome has been designed without a kitchen and bathroom. Formerly supplied with a solar panel array of its own, the Gnome Dome is now connected to the local power grid. An outlet cleverly disguised in the built-in desk provides the occupant with a handy place to plug in a lamp and a laptop. “I think the Gnome Dome is an excellent example of how construction can be a highly accessible discipline, even to people with no experience, and still be extremely difficult to master,” Kyle told me when I asked what advice he would give to those who want to experiment with construction in their own way, using recycled materials. “The original builder was a novice, and so he did not account for the moisture problems the structure would encounter, but nonetheless the framework he achieved was nigh bomb-proof. I learned a lot about construction by having to creatively address the problems inherent to the building when I bought it. So, accessibility comes at the price of mistakes that have to be dealt with.” Sometimes those mistakes are what artists call happy accidents, like the tracery of paw prints strewn across the Gnome Dome’s earthen floor, left behind while the cob was still wet by Kyle’s feline friend, Providence Sunday. “I thought about plastering them over,” Kyle recalled with a chuckle, “but the first tenant insisted they are one of the coolest things about the space, so instead of covering them, I decided to feature them prominently.” If you want to visit Dancing Rabbit Eco-Village and see the Gnome Dome for yourself, (along with all of the other amazing projects members are undertaking to develop a way of life that is more in harmony with the planet,) now would be a perfect time to scope out the schedule for the community’s annual Visitor Program. You might even be able to rent the Gnome Dome during your stay through AirBNB – Kyle would love to have you! I’m sorry, $3000 to build a dirt floored hole in the ground one room shack that’s not very energy efficient? I could turn $3000 into a lot more home than that, especially if I could repurpose materials.

The moisture ventilation unit and windows were expensive, but crucial to correct the mold issue.

Hey Phil,
I am sure that Kent will be happy to publish photos of your $3,000 mansion once it is complete. So get to it. Keep us posted on your progress. We’ll wait here.

Yea Phil, I agree, why should anyone think that making a beautiful home on just $3000 is a good idea?

I too think its a swell idea to insult something with a minimal understanding of it! You are obviously an individual with limitless authority on the subject and clearly you have nothing to overcompensate for by leaving such a negative comment.

May your masterful craftsmanship, undefinable charm, and peerless wit never let you down.

Thanks for saying it so much better than I could, P.O.!!

Great job! Looks like it would be a fun place to stay for a few nights.

I am so glad you kept the paw prints, Kyle. 😉
The Gnome Dome is a wonderful place to stay. Comfy and more roomy than you might think. I had plenty of space for all my things and it was cool with the chimney fan, even on a hot night. Only regret was not getting to try out the mass heater to warm my bed. But I’m very happy to see the construction photos. Great write-up!

Really impressed.. Bravo guys! Would love to visit it.

The beauty of (and in) this structure is the realization of experience gained through hands on application. Yes, Phil and others may have differing opinions on the cost effectiveness, but a $3,000 tab for a hands-on R&D lab is a very cost effective first step to bigger, better and more efficient projects. If every young person in our country were to be given the same amount, told to use their heads and think through a design then construct it, think of the fantastic creations we’d have. And think of the bright young minds who’d be looking for the next challenge with all that experience.

This is a perfect example of form over function and idealism over practicality. $3000 (not including lots of labor) for an 80 square foot space that can’t function independently as a home without the Community’s infrastructure?! Yes it’s beautiful, yes it’s pioneering in technique, but how is it efficient or practical? Art for art’s sake is fine, but don’t try to pass it off as legitimate.

[…] to live with the bare minimum of convenience, you can probably expect to spend at least $500 on up. Kyle’s Gnome Dome is a comfortable, minimalist tiny space, and cost about $3000 overall to construct, not counting his […]