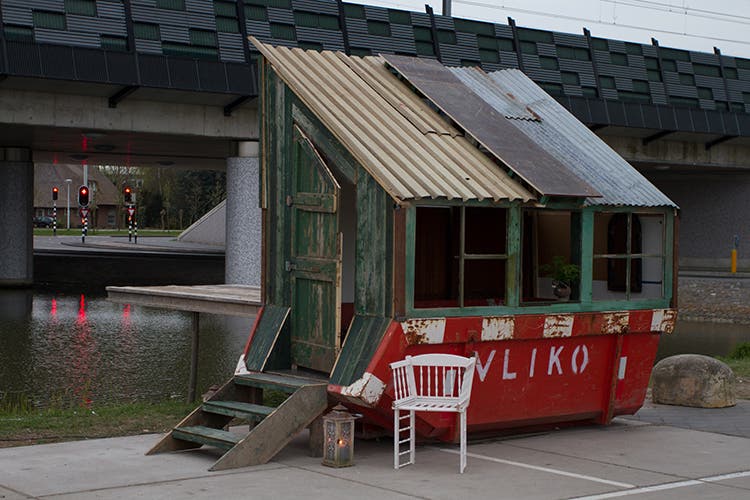 Rikkert Paauw and Jet van Zwieten of FOUNDation Projects in Utrecht, Holland  have been making recent news for their ability to turn the ordinary dumpster into a unique space – with items actually recovered from dumpsters. Their current designs are being used as meeting spaces and bars, but with a little imagination could be turned into tiny houses.

The artists put several of the large trash bins in the local neighborhood, and filled them up with trash and materials collected from around the town and donated by locals. They then used those materials to create the structures. The project, called Straatlokaal, has been used to promote responsible waste removal, recycling and object re-use. The building of each project took about a week and the Dumpsters were set up as alternative bars and places for creative entrepreneurs in the heart of Ultrecht’s Neude Center Square. Because the dumpsters have wheels, they can be moved around the city.

These Dutch “recyclitects” also build furniture, lamps and custom items from reclaimed materials like wood pallets and cast off metal. They have a few videos on Vimeo showing the Straatlokaal building and creative process. Funky! In approach AND, perhaps, in smell. No, I dig it!

kind of strange
I just don’t understand starting with a dumpster. It doesn’t really make sense.

It’s all about getting us use to the idea of where we’re all going to be living soon.

I love tiny homes, and even great experiments like this, but I wouldn’t actually RESIDE in a dumpster/home, or something that could be mistaken for the dumpster of an actual home. A big home doesn’t equal success, and a tiny home doesn’t equal failure, but living in a dumpster would pretty much mean I had failed as a human being, as it does today for many unfortunate people who do live in actual dumpsters.

But I do applaud the creativity of the artists and their message about recycling and re-use.

Finally I can afford to own a home and stop renting, but I don’t think I will…

Pallet wood has often been treated with toxic insecticides. Using it for dwelling spaces may cause harmful exposure.

http://www.apartmenttherapy.com/upcycled-wooden-pallets-green-158131 See this article for a discussion of risks involved.

Keyword: “Artists”.
It’s meant to inspire thought, discussion and reaction.
Perhaps we should be appalled that enough materials ends up in a dumpster to build a shelter? Perhaps inspired at the creativity?
Perhaps we should ponder the very existence of the dumpster itself because nature does not have dumpsters…

A tiny house on a movable trailer makes more sense.

I agree,
Make it movable.

From the article, it is to get people to think, I dont expect someone lives in them, they are put up around town to make people think about what they are throwing away, and try to re-use it. I love the idea, though I’m not sure I would live in one, it would certainly turn heads!

I love the sink shelf!! It’s all cool-looking, but does it smell? That’s what I wanna know~!

Dumpster diving taken to the next level.

I due respect to the movement that recycles reusable materials. In the Netherlands, Germany and other EUcountries people making seeding plants an creating objects of usefull dumped materials to show that useful materials in large quantities are throwen away.
Nicely fits the documentaries that show how much food and other useful stuff are destroyed, while half the world is hungry and living under cardboard plates or worse.