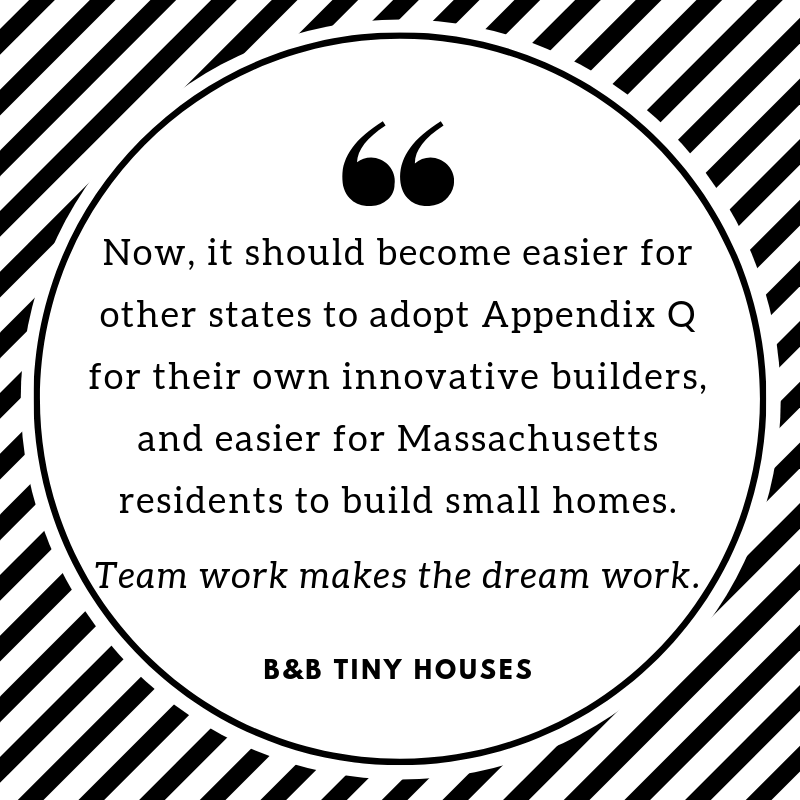 Last month Massachusetts officially became the sixth state to fully adopt the Appendix Q.  It joins California, Idaho, Maine, Oregon, Georgia. That is to say, these are the first states to adopt this groundbreaking International Residential Code optional guidelines. It provides a model building standard for houses 400 square feet and under, addressing small space design/build specifics like sleeping lofts and emergency egress.

The journey to statewide Appendix Q adoption took two years. During this time, officials and advocates made an impactful collaboration. This included various supportive building department officials, state senators, and dedicated reps from B&B Micro Manufacturing and the American Tiny House Association. Most importantly, the advocates pushed the effort forward, every step along the way. Further, as can be expected, they faced many ups and downs. For example, about halfway through the process, a lengthy government shutdown stalled progress.

Ultimately a state bill passed in January to actively encourage the official adoption within a year. Then five months later, the state building department and Governor Baker made it official.

“This has been a long road, and many people have helped make it happen through letter-writing, testimony, strategizing, and bill-writing (special thanks Senator Adam Hinds and the Massachusetts Smart Growth Alliance). Now, it should become easier for other states to adopt Appendix Q for their own innovative builders, and easier for Massachusetts residents to build small homes. Team work makes the dream work. Congratulations to all who made it happen!”

To clarify, Appendix Q directly addresses tiny houses on foundation. Though, on the local level, it has been adopted and modified for tiny houses on wheels in two planned unit developments, Lake Dallas Tiny Home Village in Texas and Escalante Village in Colorado. Each added a tie-down requirement.

To learn more about the Tiny House Appendix, and its implications for the tiny house movement watch documentary, Living Tiny Legally, Part 2: