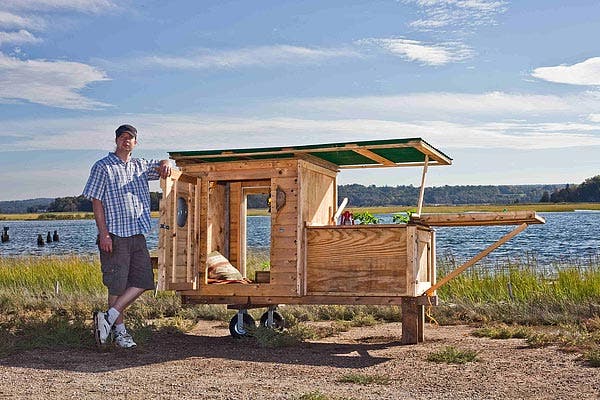 “Humble Homes, Simple Shacks…” a NEW version of the book…AND we’re looking for YOUR cabin photos- the wilder, the better!

After having rejected two other interested publishers earlier this year, I have recently decided to team with The Lyons Press (who found and approached me out of the blue (after a CT news article ran) because of their staff and track record/catalog. They’re the people responsible for some incredible books from the likes of Shay Solomon, David and Jeanie Stiles, and so many more- all books I’ve loved and found inspiring. Naturally, its a honor to soon become part of that team in tiny housing. David and Jeanie Stiles (the author duo of so many amazing books) have also agreed to write the intro to this new book. This is huge for me, personally, as I own almost all of their releases- some of which inspired what I’m trying to do. As for my decision in this- mainly, while being VERY hesitant about signing a book deal, I’m going this route because its getting VERY tough to keep up with orders as of the last few months (especially after NPR, Readymade, and Make Magazine features). I’m the sole force behind the printing, assembling, AND package-stuffing with this release, and with two bands, two kids, a carpentry business, another book in the works, my “Tiny Yellow House” show (which I host, direct, AND produce), constantly building small cabins (and working on my own cabin in VT), naked bounty hunting, and even more in the works (ongoing home remodeling), my schedule’s getting nuttier than a Planter’s factory! Its safe to say that coffee is a large part of my diet as of now.

This NEW and expanded version of “Humble Homes, Simple Shacks…” most likely will be out Fall 2011- a revamped/added-to/extended/COLOR-photo-laden NEW edition of “Humble Homes, Simple Shacks…”. The book will have SEVERAL brand new/added designs, interview-sections, and more. I’m also going to use this printed opportunity (within the book) to thank and help so many of the people, blogs, and papers who have been so incredibly kind and supportive of me and to what I’ve been doing over the last few years.

In the meantime, I have a little under 150 copies of “Humble Homes, Simple Shacks…” left- copies of what will soon become the “old, handmade, soon to be “illegal” version”. Once these are out, everything’s going to be handled by the indie-publisher Lyons Press. Also, MANY of the drawings in this older version of the book will NOT be in the worldwide, newer version. They may never see the light of day again. Or could possibly later be released in a b-side style book, alongside some newer, unseen sketches.

Meanwhile, ANOTHER new book (about 1/2 done now), as well as a kid’s construction book, AND a comedy-based (and fort-tied) zine, are WELL in the works- one of which will be independently released from the ole basement again (well, until I near exhaustion and have to hand it off elsewhere- pending any interest).

So, thank you ALL so much for helping me to get to this point, and for helping to spread the word on tiny housing! MANY, and I mean, MANY of you will be thanked and plugged in this future, real-deal, version of the book. Griswold (a continual, huge supporter and friend), Janzen (the first to ever post on anything I’ve done), Zeiger, Pino, Johnson, Shafer, Sharpe, Fornoff, Kahn, Brawyn n’ Stern, Schwarzeneggar, and so many more….we’re getting all of you into this book one way or another (whether you need the help or not!) so as to reciprocate and to let even more people know of what you’re doing.

AND….To any with some ultra-cool Hi-Res cabin shots– I’d be VERY interested in possibly including your work in the book as well- you can email me at kidcedar@gmail.com. Ultra-funky and bizarre is what I’m mainly looking for, but most anything, well-executed, and original, will do. Hey Deek congrats on getting a publisher, Good luck to you in all of your endeavors!

WOW! Thank you for letting us in on your schedule, You are one busy man! Thank you for making our lives better, we really appreciate it. I think this is a great idea – YOU need to do some simplifying! Very happy for you!

lol- thanks Debra (and Tim)- yeah, things are a little insane right now- but I’m loving it. I’ve always been a geek interested in far too many things I guess…

You’re right though, I could use some simplifying myself- and I’m working on it- ie. two weeks back I unloaded a TON of stuff from my own small house at a neighborhood yard sale….baby steps….baby steps….

Also- thanks Kent! And thanks to those who have been sending photos of their work- some of your projects are truly inspirational! I’ll be posting some of the submissions on http://www.relaxshacks.com here and there…

The book on naked bounty hunting comes out when, then? Because I’ve been an afficianado of this source of income for years but I am sure you have tips I have never even considered.

Congrats on your book deal and your seemingly limitless energy, coffee inspired or otherwise!

“Bounty hunting in the buff” will be out in summer 2078- issued by a then automated, robot-run, publishing house….it won’t be in “true” book form either, but available for direct-download into the human brain…

thanks for the kind words!
-Deek