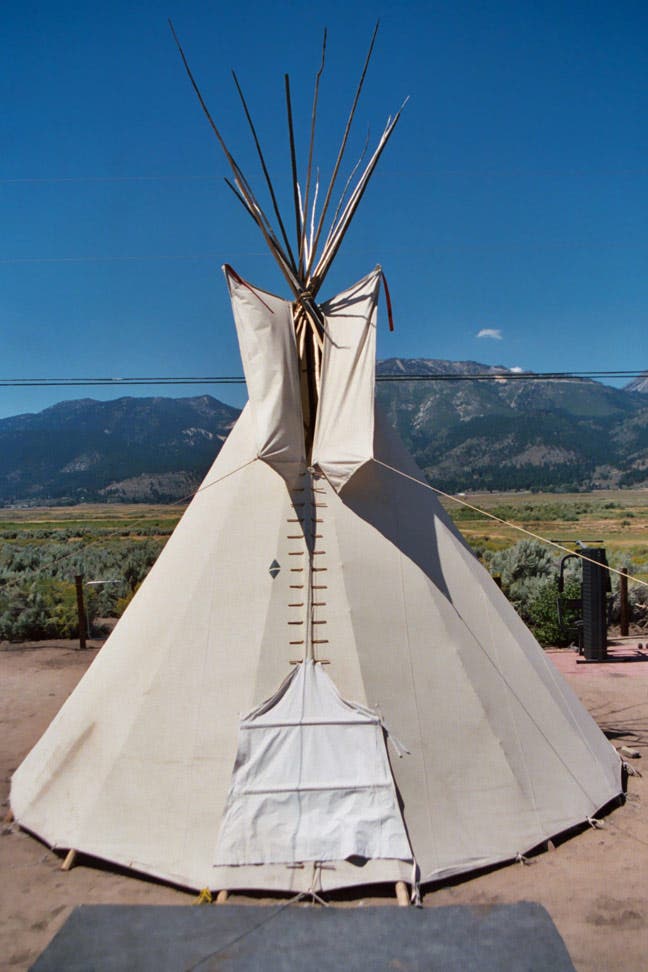 My neighbor, Dale, lived in a tipi for five years while he saved up to build his own house. He set it up on the land of an acquaintance who owned a ranch in exchange for working on the ranch, and was able to use the bathroom and water supply of the ranch worker’s apartment. He ran an electrical cord under the ground from the apartment to run an electric blanket. “You can be comfortable anywhere if you have an electric blanket.” he said. His tipi from Sacramento tent manufacturer, Goodwin Cole, housed a bed covered with sheepskins, a small dresser for clothes and a Franklin stove which kept the tipi warm in winter. For cooking, Dale used a Coleman stove outside on a picnic table.

Courtesy of Dale and Denise Barcomb

Dale said he chose the tipi, rather than a tent or trailer, for the romantic aspect of it. His background was in Anthropology and his study of the American Plains Indians gave him the knowledge he needed to live their way of life. He said the best part of living in a tipi was being woken up by the daylight coming through the canvas in the morning,  and because of the conical pyramid power of the structure, he slept very well. The worst part was the lack of a noise barrier and being open to the elements. “But living that way forces you to be a part of the outdoors,” he said. Dale and his wife, Denise, still use the tipi in their backyard for a summer getaway.

Nomadic people have used portable tipis for thousands of years. The word tipi (also teepee or tepee) comes from the Lakota word meaning to dwell or live. These simple, circular structures provide snug, low-cost shelter. Even though they look very basic, a well built tipi is precisely designed. Tipis consist of four elements: a set of ten to twenty sapling poles (depending on the size of the tipi), a canvas or hide cover, an optional inner canvas or skin lining, and a canvas or skin door.

Prior to the introduction of horses to North America, tipis were only about 8 to 14 feet in diameter, since the poles and buffalo skin coverings were pulled on travois from one encampment to another by dogs or women. Once the American Indian plains people acquired horses, tipi designs expanded into the shape and style we’re familiar with today. By the late 1800s, after the near extermination of the buffalo herds, tipi covers made from bolts of canvas provided by the U.S. government replaced the 10 to 14 buffalo skins needed for the earlier style. Most tipis now are made of canvas and are about 16 to 20 feet across with ceilings 12 feet high. Many modern tipis include raised wooden floors for the sleeping area to keep bedding and clothes free from bugs, dirt and dampness. A fire pit or carefully vented small woodstove in the tipi center provides heat during winter months. In about an hour, two people can easily erect a 16 foot-diameter tipi with 22 foot-long poles. The conical shape of the structure makes it stable in the high winds that often blow briskly across the Great Plains, and closable smoke flaps keep driving rains outside. Tipis are routinely transported to powwows, barter fairs and rendezvous on a truck’s carrying rack. At Burning Man this year, I saw whole villages made out of tipis. They seemed to be very wind resistant and cool inside. One aspect of tipis that lend to the romantic vision is the artistic details of the canvas or animal hide. In American Indian culture most tipis in a village would not be painted, but those that were often featured geometric portrayals of celestial bodies and animal designs. Sometimes tipis were painted to depict personal experiences, such as war, hunting or a vision quest. Many are also decorated with pendants or medallions. Traditionally these were embroidered with dyed porcupine quills; more modern versions are often beaded. Buffalo horns and tails, tufts of buffalo and horse hair, bear claws and buckskin fringe were also used to decorate tipi covers. These attachments are often referred to as “tipi ornaments”.

Earthworks Tipis
Earthworks is having a sale of 20% off their tipis until December 1, 2008. Oh thanks for excellent post. When I was in my early teens I would spend a lot of summer nights in a tepee that my dad designed and had built entirely of waxed canvas. Oh the nostalgia! If only I new a rancher who would let me live on his land 🙂

You were lucky to live in a TIPI. Hope it is that popular in India.
My Mail Id is prakashpgopinath@gmail.com
Can any one tell me how much it will cost for a tipi tent

I have always wanted to spend the night in a teepee.
Rosemary

tipis look awesome. makes you feel like a child

Thank you for mentioning Mother Earth News. We appreciate the attention.

Richard A. Reese has STOLEN $958.00 from me! In September I paid for a set of tipi poles. I still don’t have them. When I finally reached him and asked for my money back he simply stated, “TOO BAD”. DO NOT TRUST THIS MAN IN THE FUTURE! HE HAS NO TROUBLE STEALING FROM PEOPLE, THEN HIDING. DO NOT DO BUSINESS WITH THIS MAN!

Did you take him to small claims court for the money? I would have. Immediately.

We had the most wonderful campfire in the teepee last night. I had all the fairy white lights on and we sat playing sudoku and being on two laptops. Mj was in the swing coccoon chair for awhile, but then moed to the bench swing.

There are some gaps in-between some of the windows which really messes up the airflow.

I decided to paint the trim of the 78 windows black! Then it will match the logcabin black of the house. It will no longer look like a hodge podge of windows from the dump. Nope, it’ll look really elegant.

But I think It’s too cold to paint it today. It was mighty cold again. almost frost weather again.

What a wonderful post.I can’t wait to one day have the opportunity to spend one or (hopefully more nights)in a tipi.

This is perfect for my attitude to existence.
Thank you

i always use electric blanket during the winter times to get more comfy at home.:

Hello there, we love love love your post about the tipi tents. We would actually love to move into one ourselves. We have also found a website to buy one but we have been told that there is no cover for the tents. Which left us confused. How is it possible to live in a tipi tent when its raining or snowing. All that is in the tent will get wet. thanks so much,
Kim

Halito!
My daughter and I have been looking at these for years… We’re looking to live in one full time. Back to Choctaw, Cherokee roots. The living part. Simple. Yes, we would still have to go to market but we are going to do it. I raised my son in the middle of no where with very little. Very simple. Old deer woods cabin. Yes, simplistic is best. Thanks for your article. God bless.

Wow, what an inspiring article. So great to know more about the history and details of tipis.

If you get a chance to spend a night in a Tipi do it. The Scout Troop bought a Tipi and we cut down the poles in East Texas. The Sap from the trees did not come out of the clothes and really could not wear them again. We took the Tipi to Enchanted Rock in Texas. When you climbed up and look behind you, it looked wonderful. We sat on a rock to watch the pass buyers stop and look into the tipi. We took the Tipi to schools and spoke on Tipi Etiquette and made some Native American item that would be used. Boy Scout Troop 113 Victoria Texas. Ronnie Stanford