Tiny House Tub (or boat for those of you without sea legs): Part 3 - Tiny House Blog

Tiny House Tub (or boat for those of you without sea legs): Part 3 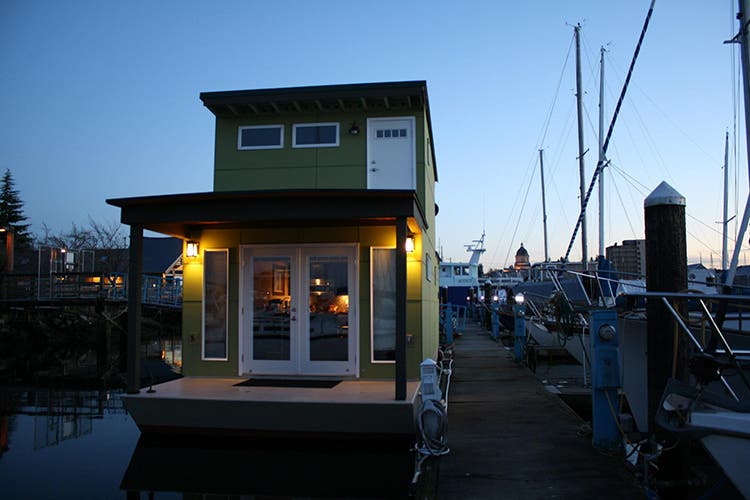 At this point a number of you as readers are questioning as to whether or not you are reading about tiny houses or boats? Truth is you are reading about both. For too long tiny houses have been stereotyped as just being 16′ – 24′ trailers with cute, wooden structures bolted on top. They are so much more though with inspiration being drawn from historical dwellings and modes of transportable dwellings throughout history.

From the earliest viking boats and Chinese combat junks to the luxury liners of the 20th century live aboard vessels have shown us how to live in compact fashions under a number of variables including weather, air salinity, moisture, and energy efficiency. Beyond that though they have become the tiny house of choice for many. In fact, in the last US Census it was determined that just at 13,000 American citizens live full time aboard sea vessels. Some of these are bound to be houseboats and shanty boats for sure. A quick view of sites like SailBoat Listings shows no less than 250 sailboats and yachts for sale that feature entire living quarters for full time living. AirBnB shows some 53 sailboats and yachts in Florida alone that qualify as tiny houses.

Let’s return to the obvious though.

A houseboat is a boat that has been designed or modified to be used primarily as a home. Many are motorized but a number are not because they are usually moored or kept stationary at a fixed point and often tethered to land to provide utilities. Sound familiar?

As it is with tiny house trailers, Seattle, Washington is home to a relatively large collection of floating houseboats and even float house neighborhoods. 1905 saw the first recorded notice of houseboats in Seattle with that number peaking to 2,000 by the 1930s. As of 2012 there were just 500 occupied houseboats in Seattle proper.1 A lower number than the 20th century to be sure, but still a pretty impressive number considering how non-traditional they are. Interior of the houseboat Belafonte.

For the more adventurous though life aboard a sailboat offers adventure, the high seas, an element of danger, a simple way of life, sunshine, and a number of other appealing elements. Perhaps Courtney Kirchoff says it best in her blogpost from Feb. 9, 2012:

“I also like the sound of the howling wind when a storm comes through; it feels as if I’m surviving something, like I’m somehow living on the edge, when really I’m docked and safe. Best of all, it’s nice to own my home without having to make large payments for the next 30 years, especially one with a million-dollar water view that can change if I so chose.”

And therein lies the tie that binds, so to speak, of live aboard boats as valid tiny houses. They offer the very same things that we have heard countless tiny house trailer and cabin dwellers say for years. There is freedom. There is safety. There is empowerment. There is home!

As the tiny house history series begins to wrap up it becomes even more obvious that tiny houses are not limited to foundations or trailers or pontoons or wheels or anything else. Tiny houses are a state of mind in many ways. They are the physical manifestation of a dwelling this fits the personality and mindset of someone who chooses to live a life outside of the “bigger is better” mindset of modern America. Inside the stateroom of S/V Mary Christine.

Please make sure you have read the entire boat portion of the ‘Tiny House History’ series. You will find Part 1 here and Part 2 here.

I love fantasizing about living in house boats… there is something so free and adventurous about them. Hopefully one day I’ll make it a reality!

Trust me Becca. We think about it too. We don’t know how to sail and I can’t even swim so I think ours would be moored. Nonetheless, seems such a romantic notion, doesn’t it?

It seems tiny house people are a bunch hopeless – make that hopefull romantics. Guess I’m one too. I have a dream but not alot of time left. My advice – start early & stay focused!
Happy trails,
SteveP

Great idea, but what do you do with the bathroom waste.? Do you have to move the boat house to a pumping station or what ?

The obvious answer Bob is that there is a black water and grey water like an RV. All sewage goes to the black water holding tank. When full the vessel either has to go to a pumpout station (or dumping station) or if moored, must have a sewage pumpout line attached to the vessel. That is my understanding anyway. The not so obvious answer is that the vessel has an incinerator toilet that burns the waste safely.

I would probably opt for a composting toilet. Much less fuss. Seriously thinking about this for a next project…

I know incinerating toilets are very common on sea vessels. Unfortunately, when used in semi-permanently parked/moored homes, the smell of burning poop can be very offensive.

So I was pleased to find dryflush toilets. These are often used in TH rentals. See http://youtu.be/ia4-U9lZChk for much more information.

Actually, as someone who has lived aboard sailboats for 27 years, there are many options for dealing with waste. Grey water simply goes overboard. Of course, one has an obligation to ensure that you use healthy, environmentally sensitive, non-phosphate cleaners, these waters are your home. For personal waste, we have a composting head. There is also the option of a porta-potty, which you would carry off and empty in an approved facility, or there is a holding tank. With a holding tank you must either take your boat to a pump out station or you can pay to have a business come to your boat and pump out your holding tank. This really only applies to boats. Actual house boats, those that are not intended to be moved, are usually plumbed to shore side facilities.

Andrew,
very well done! Very informative. Nice push to get them thinking outside the (already becoming) traditional tiny house box. It really is about taste, lifestyle, affordability and, oh yes, personal preferences!
For those that stayed open minded and read all the posts, this was a well presented little series. 🙂

I thank you very much for your kinds words Doc. Thank you for reading and commenting.

Great story! I’ve spent many a night on houseboats, including on Lake Union Seattle and near LaConner, Washington. My daughter and her husband lived on one with their newborn baby, and what a great place to spend the night! Lester Walker’s book definitely had a fabulous plan for one, at least in the original edition. This weekend in Port Townsend, the Wooden Boat Festival will feature many a gorgeous liveaboard! Check it out on-line.

This builder is located in Sanford Florida and is on Facebook:

They have lots of photos and have almost completed their first
floating bungalow!

I thoroughly enjoyed this series too. Thank you so much for writing it. Very interesting stuff. : )

Sailboats would be very easy to live aboard. Many years ago, I had friends who lived aboard an old fishing trawler, a small one, near Vancouver Island. When I visited them, I was able to experience what it was like, and loved it. I could very easily live on a boat, with or without sails.

I have enjoyed this series. Thank you!

After many long summer weekends on various boats, we moved to Florida for year round boating weather, aboard a 55 ft. motor yacht full time with 6 children and lived happily and comfortably for about 4 1/2 years. The children, now grown, always say “Thanks for the memories”.