Was There A Tiny House On Plymouth Rock? 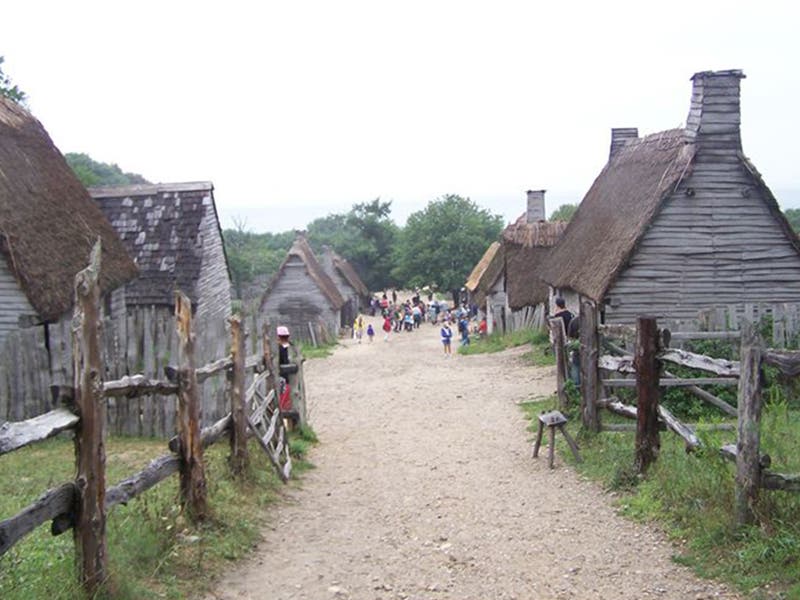 I submit this to the annuals of tiny house history.

On December 21, 1620, the first landing party arrived at the site of what would later become the settlement of Plymouth, Mass and thus began the North American tiny house movement.

Due to weather conditions on ‘the Rock’ plans to begin house construction was delayed until December 23. In the interim the majority of what we now know as Pilgrims returned each night to the Mayflower to eat, sleep, and otherwise live. As building progressed some twenty men remained ashore at all times though for security purposes. Women and children were not permitted to go ashore at first making their time aboard the vessel upwards of six consecutive months! It was a tense situation for all involved.

The first known structure was that of a ‘common house’ which was little more than an open space used to store tools and provide immediate shelter for those without any. History has it that it took between fourteen and twenty-six days to complete the first common house even though it was more than likely significantly less than 800 square feet. Built of wattle and daub – a composite building material used for making walls, in which a woven lattice of wooden strips called wattle is daubed with a sticky material usually made of some combination of wet soil, clay, sand, animal dung and straw – the common houses remained even after families began building private residences. All said and done seven residences (of a proposed nineteen) and four common houses were constructed during the first winter. The structures were built on top of Cole’s Hill (directly across from Plymouth Rock) because of its flatness and compacted soil. Why such slow construction though? Were these not the same Separatists who, with great skill, had built entire kingdoms and homesteads back in England?

Like all tiny house builds weather was the primary factor in delay. For anyone who has lived in Massachusetts during winter it is easy to see how days can slip away in the snow and ice of New England. Beyond even that though the occasional fire slowed construction. Because of the dried thatch on the roof and the open fires used by workers to stay warm it only took a spark or ember to start a blaze. Progress was made though and in the fashion of today’s tiny house community conversation, community was formed as on December 28, 1620, the Pilgrims assigned out lots to the nineteen family groups on board the Mayflower. Each family was responsible for building their own house as well as supplying labor support for common houses, storehouses, a small military outpost, fences, sheds, and even barns! It was community by mandate. Each family was also assigned a land plot that was 50 feet deep by a width determined mathematically. Each member of the family received 8 feet. So if a family had 9 members their lot would be 50 feet by 72 feet.  In theory this was an excellent proposition and one that would get families established quickly on the new land. However winter bore down in 1620 and a large percentage of Pilgrims continued to live aboard the Mayflower the entire first year. Those who did manage to complete their homes were treated to solid footing in a home that included a main room for living, eating, and sleeping. There was also a fireplace for temperature control. It is also important to note that as time progressed and homes continued to be constructed with an emphasis on permanency they began to resemble traditional English cottages more and more. They were timber framed with a steep pitch roof to allow for storage or even extra sleeping room above the main room.

We see this idea continued even now as a number of tiny house trailer designs as well as small homes, cabins, condos, and the like are steeply pitched for storage lofts and even sleeping lofts. So while early settlers were not huddling on ‘the Rock’ and discussing building codes and sustainable flooring options there is room to contend that yes, there was a tiny house on Plymouth Rock!

AUTHOR’S NOTE: Research for this article gained from Richmond Ancestry, Conservapedia, and Scholastic.

I encourage everyone to visit the Plymouth Plantation in Mass. You can walk through the tiny homes as they were in the 1600s. I was able to trace my roots back to those early days so in essence my family has made a complete circle back to small homes.

out here in the southwest, the native tribes were building tiny houses (wickiups) for millennia. even the Hispanic culture predated the Plymouth rock crew, building with adobe……..!

“out here in the southwest, the native tribes were building tiny houses (wickiups) for millennia”, as had the Plymouth Rock crew and their forbears.

Fascinating stuff… thank you for the history lesson 🙂 I know i wouldn’t want to stay on a ship for 6 months!

If you’ve ever been to ‘Plymouth Rock’, you know that there’s a ‘temple’ of sorts built over this rock that probably isn’t even 7 cubic feet in size. Almost everyone who goes says, upon seeing it, “That’s IT?” in a disappointed tone. So this article really made me laugh. I used to live in Plymouth, and we often joked about it.
Plimouth Plantation is a wonderful place to visit. I recommend it highly.

[…] ten months of landing on Plymouth Rock (see: Was There A Tiny House On Plymouth Rock), the Pilgrims had constructed seven houses, a common meeting room and three storehouses for their […]