The Covered Wagon As The First Tiny House On Wheels 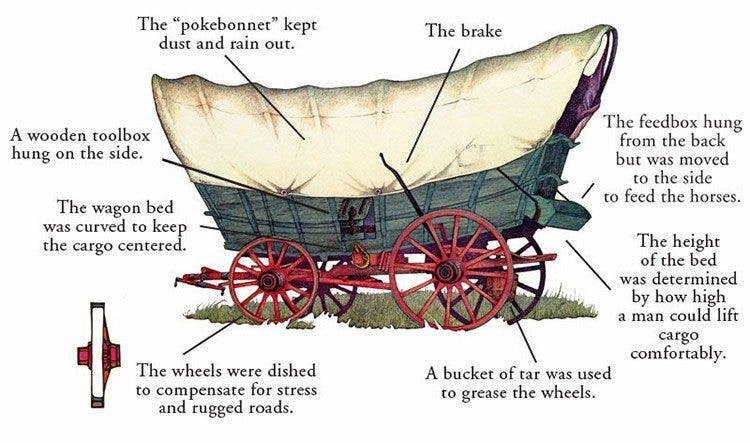 Whoever would have thought that the covered wagon in general was really the first concept of a tiny house on wheels. In the past I have written about Tiny House History 101, covered igloos, the Colonists, viking ships, and even the manger. But I haven’t once taken time to really analyze the covered wagon. That recently changed though as I was sifting around online and again came across Idaho Sheep Camp.

My first experience with covered wagons came in the form of a plastic toy made in the line of Empire Legends of the West called ‘Covered Wagon w/ Box and Extras‘. It immediately captured my attention with its 2 cowboy riders, molded plastic campfire, excavation and gold panning tools, and swivel axel wagons. Even at that age I was amazed that the two riders could camp out and almost live in these wagons that by day were just ways to get from Point A to Point B. Then through no fault of my own I caught a glimpse of the Little House on the Prairie intro. It was just a quick blip with little detail but up on hill rode Ma and Pa on the bench of a covered wagon, pulled by two, strong horses. I never forget that thought. A house. Some wheels. It was as basic as basic could be.

Say “covered wagon” in polite company and you may be corrected by some pseudo-Jeopardy contestant wanna-be who blurts out, “don’t you mean Conestoga?” To which your answer should be, “No. I don’t mean Conestoga. I mean covered wagon!” History would have us believe that the two are synonymous when, in fact, they are not. The Conestoga was a horse-drawn freight wagon and – with its curved floors and hoops ceiling covered with canvas – was the tractor trailer of its days, if you will, used to carry farm products to cities and other goods from cities to rural communities, particularly in Pennsylvania and the nearby states of Maryland, Ohio and Virginia. Designed for hauling heavy loads over rough roads, the wagons could carry as much as six tons of freight. They were made from wood species such as oak and poplar and featured curved flooring that prevented the freight from shifting or falling out when in transit. Gates at the end of the wagon were kept secure by chains and could be dropped for loading and unloading. As for the canvas stretched over top, it was to protect the freight from inclement weather after being soaked in linseed oil for waterproofing. In short, “Conestoga wagon” is sometimes mistakenly used as a synonym for “covered wagon”. The two are no more the same than a Peterbilt and a Buick. The name merely refers to the specific type of heavy, broad-wheeled covered wagon first manufactured in the Conestoga River region of Pennsylvania’s Lancaster County in the mid-18th century.

The covered wagon mentioned in literature and shown in movies was a smaller, lighter version of the Conestoga wagon used in the east.  Hickory bows were used to create the top hoops upon which heavy duty canvas, made from hemp, was stretched over.

Big, wooden wheels helped the wagon roll easily over bumps and dips in the trail, and wide rims helped keep the wagon from sinking into soft ground. The rear wheels were about five or six feet in diameter, the front ones four feet or less.  The reason the front wheels were smaller were to enable the wagons to make sharper turns. A big wheel would jam against the actual wagon body.

Each wagon could carry about 3,000 pounds of freight which was often reserved for the worldly treasures and homesteading supplies of a family of four. Most time only children and the elderly would ride in the wagon as the mother and father – true to fashion – would ride up front on the bench. The generic outfitting of a covered wagon included a toolbox on one side and a brake level and water bucket on the other. Hanging from the rear axle would typically be a grease bucket, filled with a potent mixture of animal fat and tar. This concoction served as wheel grease (there were no buddy bearings then!). As for the outrigging.

Every wagon carried along two extra bows, six S’s, and six open links for repairing chains. A horse drawn wagon was no good if the horses did not stay hitched. What is most interesting though is the importance of the trailer build, if you will, that supported the covered wagon. Just like a tiny house on wheels, the covered wagon was nothing if built upon the wrong underpinning. The wagon undercarriage has a single ridge pole design that runs the entire length of the carriage. It runs through the front axle to a bolster point which allows a swiveling of the carriage front. That flexing allows the front axle to turn. It then has axle and wheel hubs which allow the wheels to turn, the brake to engage, and the carriage to maneuver. It really is quite an engineering feat in order to keep horses moving forward (thus the notion of horsepower), the wagon held together, and a path steered clear.

The covered wagon was essential in the expansion of the United States and seemingly essential to the progression of nomadic existence on North American soil. They were true tiny houses on wheels allowing mobility during the day and shelter during the night.

Covered wagons were usually filled with stuff up to the gills, no room for sleeping. It isn’t a tiny house, or a tent on wheels. But once you got where you are going, it was common practice to take the wagon box off the axles and live in it while building more permanent shelter, while using the axles to transport logs and such. For years, in a few cases, which was unpleasant.

You are technically correct Jana. Perhaps I should have said that they were transitional homes that served purposes even beyond a home. While it is true they were filled with possessions there was room for riding and sleeping as evidenced in a few journals from the Oregon Trail. Men typically slept on the ground outside, around a fire, as much for space as for protecting the women and children. Saying they were not tiny houses is truly a matter of personal definition as some might say a triple axle, 350 sq.ft. house on a trailer is not a tiny house.

I find it fascinating how our society tends to revert back to the old ways of doing things. Just as Jana said and Andrew reiterated, the early frontiersmen’s wagons may not have been, by definition, a tiny house, but they were their only form of shelter in many places that they traveled. Today, many of those who do live in a tiny house may feel much like the early frontiersmen. I think that there will continue to be a huge push toward the use of tiny houses because of their practicality and efficiency. I wonder what the next aspect of our lives people will try to make simpler.