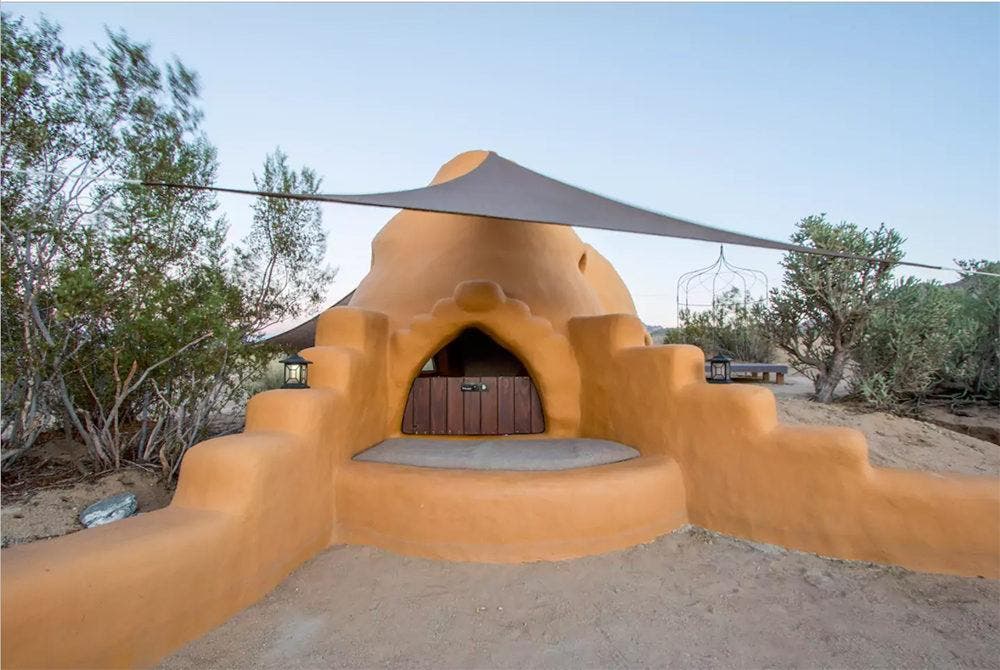 Built with earth bags filled with sand, Lisa Starr’s Bonita Domes in Joshua Tree, Calif. not only use local materials, but also integrate spiritual shapes. Each small dome structure follows the principles found in the “Flower of Life”, a structure used in sacred geometry.

The Bonita Domes village is located in Joshua Tree, Calif. Starr is a Holistic Health Practioner, yoga teacher and Drum Medicine Woman who was inspired by the building techniques taught by the California Institute of Earth Architecture. Their SuperAdobe homes are built from earth bags and arranged in layer or coils. Strands of barbed wire are placed between each layer to act as mortar and reinforcement. The bags are then stabilized with cement, lime or asphalt emulsion to create rounded structures that look like they’ve popped out of the earth. One of their SuperAdobe homes was featured in an episode of “Tiny House Hunters.” Both the West Pod and the East Pod have a shaded lounging area by the door. Each Pod’s sleeping space is small, but cozy and private. Starr’s village, named Bonita Domes, consists of three separate structures: Starr’s 1,360 Dome Home with a separate suite, and two sleeping pods. The West Pod and the East Pod are both available for rent and include full beds, solar powered lights, and a small storage area. The pods do not have a bathroom, but there is a communal shower house with towels, and an outhouse with a flushing toilet. Pod visitors also share the communal outdoor kitchen and The Village’s kiva fire pit.

The kiva firepit has views of the Southern California desert. The communal kitchen is outdoors, but includes all amenities. In the shower house you can see the circular design of the SuperAdobe. With the 18 inch thick earth walls, the Dome Home and the Pods stay cool in the desert heat. On colder nights, the Pods are warmed with tea light heaters. The Dome Home private suite with its own entrance is also available for rent on Airbnb.

[…] The twisty tree shapes, Cholla cactus forests, and blobby boulders in Joshua Tree make wonderful Dr. Seuss-style memories for your kiddos on this desert adventure. For a quick day trip from the incredibly kid-friendly Palm Springs, stick to exhibitions along the main roads; for a hike, the one-mile loop trail through Hidden Valley is a good introduction for little ones. Start your adventure at the West entrance, then work your way along the road exiting the park at the South. The most scenic sections will be located close to the road at the beginning of the trip. If you really want to immerse yourself in the beauty of the place for several days, think about staying at these little private pods at the Bonita Domes. […]