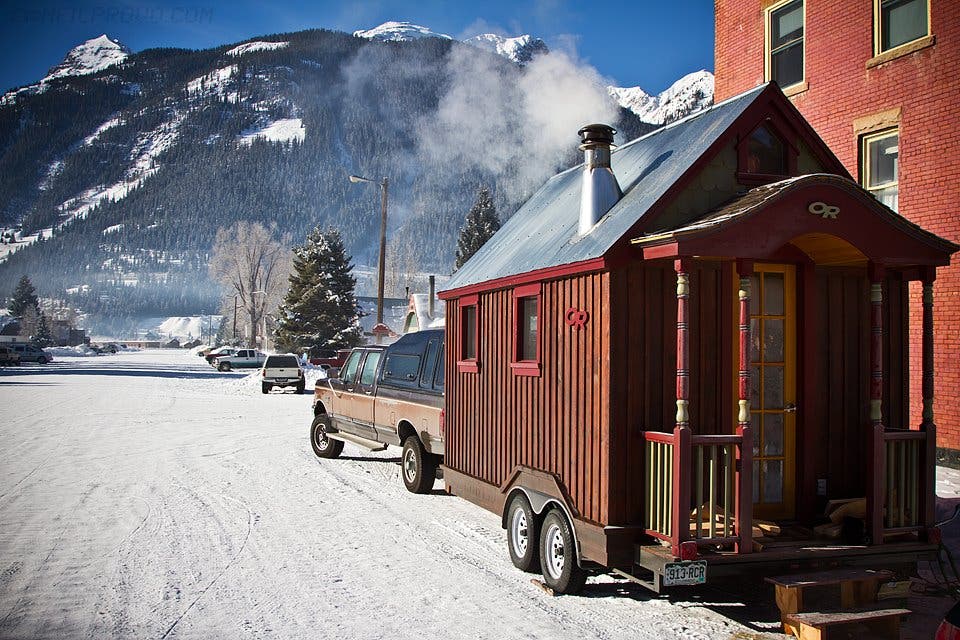 If you live in a ski town, keep an eye out for a truck towing an elegant tiny house and five ski bums on the lookout for some great powder and free Wi-Fi. For six weeks, Molly Baker, Zack Griffin, Neil Provo and their videographers Sam Griffin and Andy Walbon will be road tripping around North America in a 112 square foot house on wheels and will be posting their videos online. The idea behind the trip is to find grassroots ambassadors for the outdoor gear company, Outdoor Research, ski some of winter’s best deep powder and meet fellow ski enthusiasts. They also wanted to take this trip in a tiny house to show that a passionate and low-impact lifestyle could be had for little cost. “We are refining the entire process of living as ski bums,” Zack said. “It is really about figuring out what you do and don’t need. For me, I want to ski and there isn’t much else that I need.”

Initially, the group thought they would take the trip in a van with a wood stove – similar to one that Zack lived in in the parking lot of Mt. Baker. But, after seeing some of the Tumbleweed tiny houses, the crew decided a custom built house would meet all their needs.

“Zack (who works as a carpenter in the summer) built the tiny house over the course of seven weeks,” Molly told me as the group made their way up to Big Sky, Montana. “I don’t think I’ve ever seen someone work that hard every day with no breaks. It was a labor of love.” While building the tiny house, Zack and his crew had to deal with snow piling up on their open frame, a freak cold snap and a tree falling on the tiny house. Zack utilized some reclaimed pieces of wood, doors and windows and re-used some cherry trim from an old job site.

The tiny house has a loft that sleeps two people, plus a “drawbridge” bunk bed that comes down from the loft and a pullout sofa bed. A storage area above the door hold ski and camera gear. There is no bathroom or shower, but there is a kitchen sink and a hot water heater as well as a small refrigerator. The group relies on hostels and the kindness of friends and strangers for their bathing needs. The tiny house has electricity, a battery and generator, and the skiers cook with a toaster oven and a two burner propane stove. The handsome, French wood stove came from a mill in the old mining town of Gold Hill, Colorado.

“The only meals we’ve really cooked are breakfast and maybe some bagels,” Molly said. “We’ve yet to do a full-blown dinner. We are usually too tired from skiing all day.”

The ski bums and their tiny house have had extremely warm receptions from the places they’ve visited. Firewood has been gifted to them when they are out during the day and they have even received some Secret Santa gifts. Molly also said that her parents, who are in their 60’s, also want a tiny house.

As the group makes their way around to various mountains, Molly is also impressed with how easy the living is in a tiny house – even as the only woman living with four men.

“They are really tidy,” she said of her fellow ski bums. That “tree” sculpture is also the staircase… rather elegant solution to the clunky ladder situation.

I have been following these guys awaiting every new update. The tiny house is adorable and I love the reclaimed features. What fun!

What a cool (no pun intended!) traveling home! So many great ideas and design features that you installed. I love the curved roof awning over the front door and I really love the gang plank bunk in the loft… how does it work? Does it retract or is it installed permanently?

If you wonderful people are coming to Revelstoke BC to shred, PLEASE contact me! Would love to do an interview with you to share with the people and especially, town council of Revelstoke, Canada’s newest ski resort town. We have been facing a growing problem of affordable housing that every resort town faces, and I am mobilizing to present some tiny home ideas to get the town thinking outside the box, and inspire people to come up with our own solutions to housing. brokenspoke70@hotmail.com is my contact, happy shredding! and happy new year!

Nice story… I watched the videos and suddenly realized I’ve lived there before… for a while I lived in the old train depot in Silverton.

The smell in that place must be dreadful. The feet, the sweat.

Well, you could always camp outside if you felt you’d stink up the place.

Those stairs are fabulous! I’m building those in my tiny house!

This is amazing, my two passions combined, tiny homes and skiing with friends. Fabulous.

How have you set up your internet connections? Love the stairs….

I don’t know for sure what they are doing, but I know many tiny housers go with the Sprint 4G wifi card that is satellite connected right from the computer.

Sprint 4G wifi card that is satellite connected right from the computer.

This house has the most aesthetically pleasing exterior I’ve seen so far. And those amazing stairs take the cake.

The only reason they’re able to do this is as corporate shills.

Anyone else trying to do this will be stomped. It will be fun while it lasts – ski towns have EXTRAORDINARILY oppressive laws about living in trailers, and the police have little to do due to the low rate of actual crime and love squashing people. Your house will be ticketed, confiscated, and destroyed.

Should have been “why” not “when”.

I sell “big houses” but these are really cool, love the plans – nice job!

Very nice structure or shed, on a trailer. Provides very basic shelter. Great for bonding. Neat idea, but a tiny house, I must be missing something.

I think this falls in the inspirational ideas category. A person might want to make a similar tiny house but arrange it to suit their needs. I think in terms of more of a tiny house continuum than tiny house movement and there are a lot of places where something like this could fit. Just to see those stairs alone was well worth it. Those are brilliant and serve double duty as a spot for your tea and book or whatever during the day.

[…] group remains motivated by three things, great powder, meeting up with great friends and  to show that a passionate and low-impact lifestyle could be had for little cost. Share this: January 4, 2012 by Aaron Everitt Posted in Green Building, Videos ← The […]

[…] Sidecountry Sessions Tiny House tinyhouseblog.com If you live in a ski town, keep an eye out for a truck towing an elegant tiny house and five ski bums on the lookout for some great powder and free Wi-Fi. For six weeks, Molly Baker, Zack Griffin, Neil Provo and their videographers Sam Griffin and Andy Walbon will be road tripping around North Ameri… […]

I *love* the front porch and your stairs! Lovely concept! Nice work!

[…] that small spaces can inspire big ideas and big living. They hooked me with the Outdoor Research sponsored ski-touring trailer, but they sold me with an entire section dedicated to small timber frames. Photo of pull-behind […]

Wonderful! Craftsmanship is a lost art.
The joy,contentment and simpicity of your home, together with friends to share.
What more could four humans ask for?
Enjoy! Be safe.

[…] Last January I covered Zack Griffin and the beginning of his tiny house adventure visiting the great ski areas with several friends across North America. Here is the link. […]

Uh, ever heard of an RV trailer? Get a 16′ one with queen sized bed, full kitchen, regular bathroom with shower, refrigerator, dinette table, air conditioning, heater, TV and stove. Works the same way only better because it’s built by people who know how to use space. If I had known about those in high school I’d have gotten one and took off.

Few questions…where do you park it? Its great to have affordable and cute, but parking in a public space is forbidden in most cities for all the obvious reasons…such as what do you do with waste? Do you use others’ WiFi? Electrical? Water? Affordable on someone else’s dime? These are just questions that come to mind…we don’t want roadways littered with these or someone “stealing” our wifi so how do you work this out? I’m all for micro, but on the owners’ land or leased property or campgrounds/rv parks. Not in parking lots. Do you contribute to the tax base when you park it?

These issues are addressed in so many places on all the tiny house blogs and there are a variety of answers. Nobody can “steal” your WiFi if you’re password protected so that’s kind of a non-issue.

GALLERY: You Have To See The 35 Best Mini Houses In The World! | Culture Overload - September 3, 2017 Reply