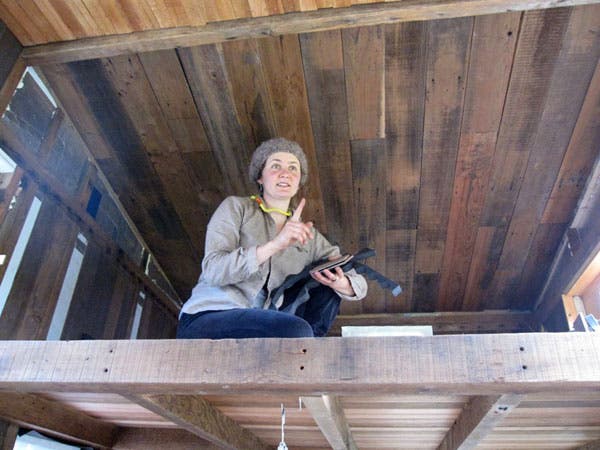 Last week I stopped by to see Jenine’s tiny house and take a few pictures as she is making progress on her home and has started to sleep and cook in it. As you can see in the pictures she is still very much in the construction mode but is making lots of progress. Be sure and visit the original post here and stay up to date with Jenine’s project on her blog. She has some nicer pictures as I caught her in working mode when I stopped by.

Jenine’s home is not your standard structure and has its own personality. She has designed a roof above the loft that lifts up to let the outdoors in and plans to use the loft as her workspace for many of her artistic projects. Jenine telling me about her roof that lifts up to allow the outdoors inside. Jenine’s house has been almost totally built by salvaged materials that she has found through craigslist and other sources. The only new items bought have been the trailer and fasteners such as screws, nails etc. Jenine’s original plan was to have a second door and a bathroom in the corner of the kitchen area but she has decided to build a small separate bathroom area and will enclose this door. Stay tuned for a follow up post of Jenine’s completed tiny house. Outside of Jenine's tiny house.

Good for Jenny! Very inspiring! I’m curious to hear about her bathroom.

I caught a lot of issues when people looked at my house on wheels, they said (collectively) that it seemed awfully tall, (at 13’3″). How tall is yours? I like the fact that its very close to the height of my house. And its built similarly (not identically) but the roof on mine is flat (with a very very shallow angle to drain water off, but the angle is adjustible bu using the tilt jack at the front of the trailer. I noticed that this one has an almost flat roof (with shallow angles) I bet this gives you a lot of extra head room in the loft! Mine sure does! And im glad I didnt go with a regular angled roof.
I only have 1 question. Im interested in how you connected the house to your trailer.
Did you use bolts, washers and nuts? or some other fastners? I used a series of bolts and nuts the whole length of the trailer (both sides obviously) and across the cross members in 2 locations (front and rear)
In some places I couldnt get the frame and the house joists to match up so that I could drill a single hole for it, so in a couple places I made some angled brackets with a pair of holes and I bolted the frame of the trailer to the frame of the house without any problems. So Im interested in how you did yours. I would just hate to see mine slide off the trailer , which is another reason I built the house over top of the fender wells, so that the house cant slide at all. Its locked in in much the same way that a log house’s logs fit together at the corners thanks to the shape of the fender wells. So Id really like to know how you accomplished your attachments. 🙂
GREAT JOB! Keep at it!
Sincerely Joseph Kenyon

Mine is around 13’4″ now, that’s an estimate because I’m slightly raised on jacks for leveling.

Response to your question: I also used bolts, washers, and nuts. In each corner I also attached an earthquake tie to the studs. There is a total of 10 bolts: 2 at the hitch end, 2 at the tail end, 4 (one in each corner), 2 (near fender toward hitch end).

It’s a great question, and looking back I realize I never made a blog posting about this subject in particular. When I’m going back over the project I will definitely pull photos to share more about this part of the process.

Hmm, this gives great inspiration for a ‘pop-top’ shack to get around height restrictions on accessory buildings in my area, also good ventilation in hotter weather. Back to the drawing board (haven’t mastered Sketchup yet)! Love the kitchen stove!

I’d love to hear more Alice. Feel free to email me if you have any specific questions:

Seeing your flip up roof reminded me (true story) of the first building i ever built, I was 6 years old and convinced 3 of the boys, Im a female in my neighborhood to build a club house in a gully behind our house. I am still building by the way, as an interior designer I do alot of construction for my clients.

It was esentially a one room building built of salvaged matrials from the gully and my friends parents houses., Our mode of entry was a trap door in the roof to keep out the other kids from the neighborhood. AFter it was completed the 3 boys decided they didn’r want a girl in their club and wouldn’let me in.( Men haven’t changed that much,I’m now 88 years old.)There was a cherry tree near the hut , i climbed it and took my sling shot ,ate the cherries and used the pits to hit them when they tried to climb out the trap door in the roof They decided it was better to let me join. after all it was on my families property.

It sure brings back memories.

Very interesting and innovative, you could use one of those old “screw jacks” from a car to lift the roof up. A little slow, but it should be able to lift that roof securely.

Congratulations on getting in! I love the opening roof. Unfortunately, it probably wouldn’t work here in Iowa where we need alot of insulation and need to make extra sure our roof doesn’t blow away!
I think I see a 20# propane tank next to the stove. We use the same tank for our two burner stove top but the gas line goes through the wall to a ventilated box outside that houses the tank. They make a big deal about not having the tanks inside.

Yes, Hap, definately. I have been deciding where I want to put the oven/stove before drilling through the wall and having the tank permanently outside.

You know, regarding roof insulation, on the non-opening side of the roof I did 5″ of rigid foam (scavanged and free, though I wouldn’t use it again, I’m looking into micilial based insulation currently). And on the opening side 4″. So it still has a R value around 24, nothing like R60.

I finally got that propane tank outside!

You could install a pneumatic or hydraulic system that wouldn’t require as much effort to get the roof raised. Once you are through doing what you wanted to do up there all you would have to do is release the pressure and the roof would close again.

Your local auto parts store has a variety of hydraulic hatch-back arm available.

Unfortunately, I was unable to attend the opening of Jenine’s tiny house but I did manage to check it out a couple of days later and WOW, I was blown away. Jenine, you did such a terrific job on this tiny house. I was amazed. I was so impressed that I came back the very next day and spent almost two hours drawing the house. You can see the drawing here:

[…] that’s no reason not to figure it out, right? Anyway, I am totally inspired by stories like this one … hopefully this will be me in a year or two!! This entry was posted in Uncategorized. […]

I (totaly by accident) found your vid on youtube and it blew me away! I realy didnt think anybody else was doing what Ive been doing for the last 4 years. I mean realy I had no clue… I was forced to start this lifestyle by the economy and most people thought I had totaly lost my mind when they saw me building my first home from salvage. Now that Ive gotten use to it I wouldnt be interested in living any other way. It truly is a beautifull thing to see others interested in a simple life. Your an insperation to me miss Jenine! Keep up the great work!!!