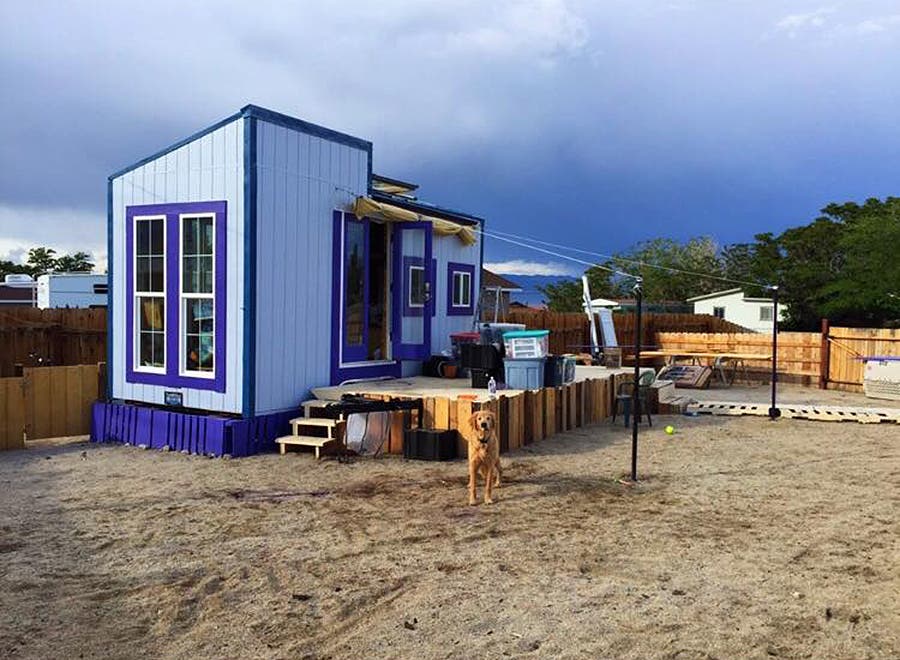 I ran into Chelsea’s tiny house project a few weeks ago and was not only thrilled that she was building a tiny house in my state of Nevada, but it she was so cool as to paint it purple. Chelsea Heinrich is a nurse in a small desert town in Northern Nevada and she and her friends and family have been working on her tiny house on wheels since 2014. The little purple home is almost completed and includes a sleeping loft with skylights, discounted windows from Craigslist, French doors and a two part roof that makes the home seem larger than 170 square feet. The house is built on an 18-foot PJ car hauler trailer with 2×6 studs and 5/8th T1-11 siding. Chelsea also built a deck with a removable sunshade and a skirt for the trailer. Chelsea parks her tiny home in a rental lot zoned for mobile homes. Her 40×40 fenced yard has 50 and 30 amp hookups, a sewer hookup and two water spigots. Friends and neighbors have given her build a lot of positive feedback.

“A few think I’m a little crazy, most people think it’s awesome,” Chelsea says. “A lot of people have stopped by curious about the house and ask questions too.” Chelsea has had her ups and downs with the tiny house building process.

“The most frustrating part has been re-doing things which, had I been more experienced, I would have done differently the first time,” she says. “For example my bathtub and my stairs. I haven’t spent too much money on these issues, but it has been extremely time consuming.”

“The most fun part was building the frame and basically everything before the walls and floors went in,” she adds. “One thing I’ve learned about myself while doing this, is that I’m not a finish carpenter. I enjoy seeing large gains each day, when you start with studs and finish the day with a wall.” Chelsea’s ideas came from various locations including photos on Facebook and Pinterest. Her favorite tiny house design has been narrowed down to the Escape Traveler.

“I decided a shed roof would be a little simpler to build, I wanted the extra headroom, and I also wanted it to be a little unique so I did the two part roof,” Chelsea says. “There wasn’t particularly one house I looked to when designing mine.” Photos by Chelsea Heinrich/Tiny House in the Desert

Way to go Chelsea. I just gave my self the tiny house bundle for the holidays. O yeh and give Jack a big hug from me, I recognized his driveway and garage. He’s so talented. Did you get one of his wooden kitchen blades?
Enjoy the Journey

First off, You are awesome. Congrats on the this awesome build. I only have one question. How did you attach the house to your trailer?

I am particularly curious about how you found / purchased your lot. Did it have electric and sewer already? The house is, naturally, wonderful.
Thanks!

I love it. Good for you Chelsea. I have also built a tiny house for myself in the New Mexico desert. My only regret is that I didn’t start when I was younger. I was already in my 50s. Now I am 66 and just starting to live there full time. You did a great job. Enjoy!

A few answers… The house is attached with a combination of 5/8 bolts welded to the trailer frame, and construction ties which connect the base plates/studs/roofing and wrap around the house horizontally.

As far as choosing the trailer, I would definitely recommend buying a new trailer. There were fewer options when I bought mine, but there are some great TH-ready trailers now. I definitely recommend getting one primed for a TH (with bolts, flashing etc already installed.) it took a good month to prep the trailer from the Carhauler I bought to a Tiny House foundation. I don’t remember the trailer price exactly, but it was a base model, PJ Carhauler that I bought for the going price.

The lot I found was already zoned for mobile homes, it had hookups for sewer/water/electric already in place. The renters before me had a propane tank I believe as well but it was not here when I moved. I’m currently just renting the lot as I do plan to move on soon-ish. All I really did to the lot was put up some fencing and trailer skirting, which is mostly to keep my dog out from under the trailer and provide a little insulation under there.

Well done! I love this tiny house movement, just need to convince my wife to get on board with it. If anybody else is interested in tiny house living in northern Nevada, I actually own some land near Elko that would be perfect for a tiny house or off-grid type setup. The land is zoned AR (agricultural-residential) and doesn’t have many restrictions on use. Please e-mail me at marketing@landparker.com if you want more details.

I want a tiny house, but unsure of the laws in Nevada? D. I was looking at the south end of Reno.

Wow! Congratulations! I am impressed. I am so intrigued by the idea of living a minimalist lifestyle. My goal is to go Tiny in the next year or two. Selling my house, everything unnecessary to have and going for it!