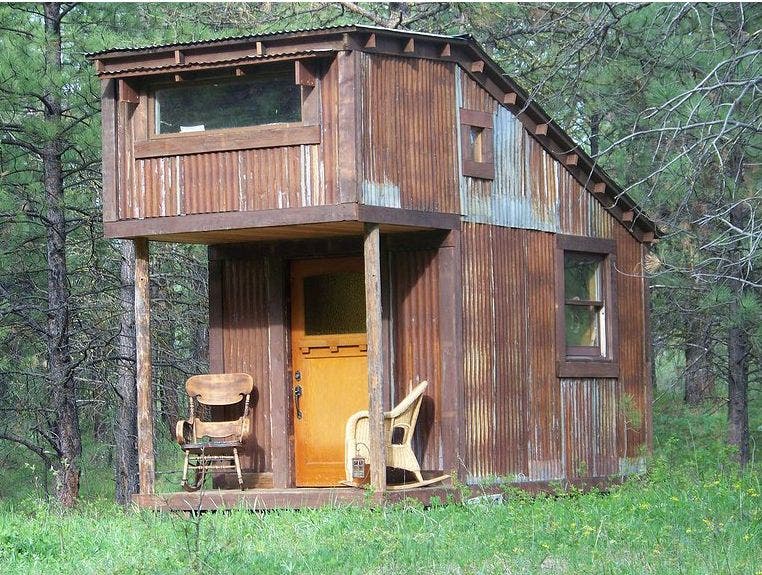 Charles is originally from Vermont, but lived in Japan for a few years and admired the Japanese tea house designs. He eventually found himself in British Columbia living in a 7×12 foot vardo made by a woodworker friend. The vardo had no electricity or plumbing, but did have a 3-burner propane stove, a Jøtul woodstove and a set of deep-cycle batteries to run his laptop. After his first experience in a tiny home, he built his first “microhome” in Potomac, Montana out of lumber dismantled from old barns. The 8×12 foot cabin with a five foot loft became known as the Potomac Cabin.

“The entire cabin began with a daydream of wide windowsills so my cat, 42, could sit and look out,” Charles said in Kahn’s book. “The next winter I built a second and towed it into Missoula to show at a Farmer’s Market. It sold to the very first person who cycled by, along with a promise to create another.”

Charles is now building custom microhomes out of reclaimed and available materials. He mentions on his site that something the size of the Potomac Cabin will cost approximately $22,000 and a smaller 8×12 (like the Blue Room shown below) will cost around $14,000. The interior of the Potomac Cabin Interior of the first Potomac Cabin Photos by Charles Finn/A Room of One’s Own

Gorgeous! What a beautiful and soothing living space.

Great work Charles….I love the color and flair you add to your designs.
Deek

The more I read and see of Charles Finn’s work, the more I love it. There really is something soothing and unique about these that I’ve not seen or felt before, even though I have fallen deeply for quite a few of the tiny homes here. I’m not sure what it is, but it’s there. Joy!

I’m so in love with these homes! It’s everything I want my life to be! Curious…are there bathrooms in these homes? If not, how does one handle that? Neighbors? Outhouse? Just incredibly curious! 🙂

Thanks for sharing this!

I think these little vardos have no bathrooms or plumbing. there just isn’t the space.

the best way I can see to handle your business is either make an outhouse outside or build/buy a sawdust toilet or composting toilet. A sawdust toilet is basically pooping/peeing in a 5 gallon bucket and covering it with sawdust. You either compost it for a couple years or you could burn your waste.

I like the idea of a sawdust toilet, especially if your low on space you really don’t need a bathroom, just make your bucket bowl (make sure to have a tight sealing lid) and can store it under a counter/table when not in use. baking soda could help absorb odor and i’d try to burn the waste regularly/daily. Or keep it outside if the weather/season is nice. I wouldn’t want to take a dump in a blizzard though!

What about keeping clean? You need, at the very least, a tiny shower. Are you supposed to take “sponge baths” or intrude on family and friends for a shower?

As far as a shower you can use a solar shower bag with a hose.

His web site states that he does not build homes with electricity or plumbing, since they are not needed. So you would need to have an outhouse and use a public shower or visit a friend.

I do agree that his homes are lovely and have a wonderful quality about them. If they had plumbing I would be very interested. Everyone has different needs.

You don’t need “plumbing” to have a shower. I use a metal washtub with shower curtains around it (tucked in at the bottom) and a solar shower bag with water heated in a tea kettle. I can wash myself and my very long hair with about 1 1/2 to 2 gallons of water. Everything tucks away when not in use. You can use it outside or inside.

Good for you, Alice. No Divas Need Apply, right? 🙂 I had to bathe outside in a galvanized farm water tub for almost six months when my shower stall cracked in half and took the floor of my trailer with it. No money for repairs,so I ran hot and cold lines outside the house, dragged the farm tub up behind a piece of privacy fence, and took baths right there in the yard. Had very long hair, too.
It was great, almost like a sauna,listening to owls and whippoorwills while I soaked. Until about November and I just couldn’t handle getting out of that warm water into frost.
Finally got a new floor and indoor tub, but still love that make-do outdoor sauna. 🙂

Lord, no, sweetheart, leave the neighbors out of your bathroom habits 🙂 Depending on your locale, you can set up your own little out-house or do the saw-dust toilet routine. On vacations, my family camped in the wilderness back before people expected luxuries like water, electricity and sewage hook-ups. We used a saw-dust “toilet,” a 5-gallon bucket with a toilet seat on it to prevent getting stuck (very embarrassing) outside during the day, with a shower-curtain rigged around it. At night,we didn’t want the kids venturing around in the dark, so we brought it inside. Only the modest suffered. We were able to go places others never saw.
Check out some of the other little houses on this blog, they offer great solutions to the bathroom issues. And ask yourself what you are willing to do 🙂 to avoid a mortgage and give yourself incredible freedom. Without bothering the neighbors 🙂 Best wishes.

I own a couple of these cabins that Finn built. They do not come with bathrooms. For years I just dug a ‘cat hole’ and did my business outside. But that didn’t fly too well with visitors. So I’ve instituted the Humanure Bucket System that Joseph Jenkins describes so well in his book Humanure Handbook. It is truly ingenious, and the cleanest toilet I’ve ever kept.

I am blown away by how beautiful and livable these are. !

a “home” should hold all that one truly needs to survive,plus GIVE the opportunity to truly LIVE your life, free of burden’s or debt. The tiny house’s we see here, are all of those things, and much more…an individual creative signature, of their owner’s. BRAVO…MORE, ~please!

Are there drawings avaible?

I love these spaces! Especially the skylights!
It allows the whole design to breathe.
Wonderful!

When can I move in? I would love to see interior shots of some of the littler ones, but this was worth opening my email this morning. Thanks and don’t ever do anything else for a living. It would be a waste. Sandi

Charles Finn’s homes do have so much more heart than others. They are truly beautiful. I think a hook-up for water and electricity, should one choose to use them, would be much more pleasing, but I’m old and need things younger folks can cheerfully live without. Good and soulful work, Charles.

In 1999 I built a 12×16′ shed roof cabin hanging over a running river and love it to death, but then I discovered tiny House blog and wish I’d waited those 4 yrs. to find it, would love to have a loft on my place. Anyone know how to add a loft floor to that corrugated shed roof?

I think those are really nice. I like the first one shown since it is so rustic.

As great as these tiny homes are, cozy, creative, marvelous use of space, I think I would have to have indoor plumbing especially if this was going to be a permanent home on a permanent footprint. It wouldn’t have to be large, maybe 6 x 5, that only adds 30 sq.ft and would be quite adequate for a shower/toilet/sink, maybe even room for a storage closet, and would still fit under the “tiny home” mantra. For me the tiny homes without rudimentary plumbing are just tents with walls. Kitchens are less important in a way–you can cook on the wood stove, gas burner whatever you have, microwave if you have electric.

Tiny homes hold people that eat,drink,sleep…and use the toilet and shower.

Without the basic systems to sustain life within their walls, they are not tiny homes.

The cute factor drops fast with a full bladder first thing in the morning.

*Ach!*
DeWhit….(wipes tears of residual laughter from eyes)…kiddo, that statement showed that you’re not of the right mindset to adapt to any alternative lifestyle, no matter how close you are at the moment.(No insults intended here; just a reality check.
“Sustain life”…refers to food only.
Full bladder?
5-gallon bucket,with a toilet seat & sawdust=no smell.
Shower?
A solar shower bag with water heated in a kettle.
If you can’t do these, you would be a better candidate for a Winnebago-type rolling living room.

Those are so beautiful! I do agree, I would need some kind of indoor plumbing. (I am modest). I do love the ideas of the metal wash tub and the sawdust toilet. I have a dream of having a tiny house someday, so I definitely pay attention to all of these ideas. Thanks for sharing, everyone and Charles, again, your houses are beautiful!