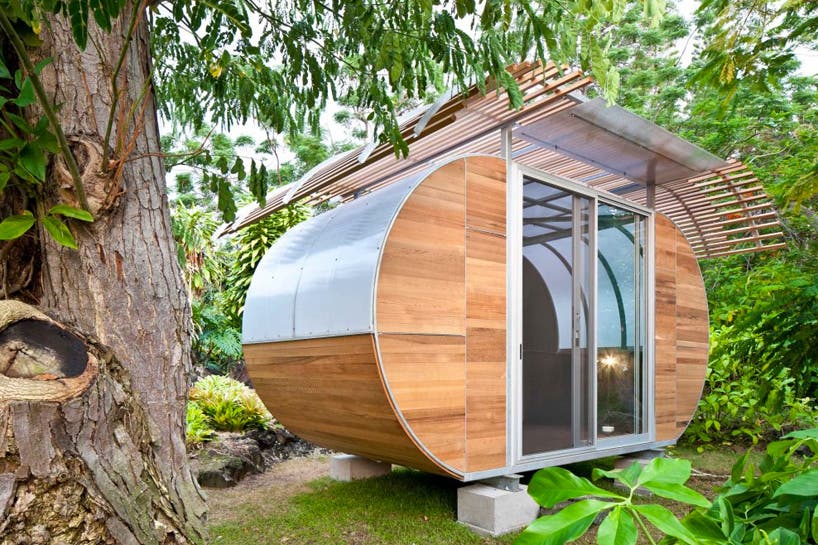 Bellomo Architects, in Palo Alto, wanted to design an IKEA-like house, only easier to put together. Just like the Swedish company’s famous furniture, this 150 square foot modular structure can be flat-packed and delivered in a box that is only 4x10x3 feet in size. When complete, it only weighs 3,000 lbs. and can be used as shelter after natural disasters, as a backyard studio or office, or as a tiny house.

The House Arc is made of 90 percent recyclable lightweight steel tubes and is designed to be totally off-grid. It has a solar roof and large windows to capture natural light and create a cross-breeze through its curvy shape. The shading trellis limits heat infiltration and the unit is is raised up to permit air flow beneath the framework. The entire unit has been constructed to withstand tropical winds and weather. Several units housing differing rooms can be placed together to create a larger structure.

The current base price of the House Arc is about $55,000 and can be put together by about 3 or 4 people in a few days. Bellomo wants to automate the production process, which should cut the price by about half. Options for the modular home include plumbing, a ceiling fan and solar panels for the roof. The House Arc was featured in this year’s Sunset Magazine’s Celebration Weekend in Menlo Park, Calif. What architects can do with $350+ per square foot never fails to impress me. That is a beautiful unit.

While this has an interesting look, this “pod” has no bathroom, kitchen, or other facilities that would qualify it as a home.

At $350/sq. foot it’s also a fail in the pricing department. That’s super-expensive and if that doesn’t include the above named features then I have to ask where that money was being spent.

55k for that? That’s crazy!! And I’m not usually one to balk at the price of a tiny home that seems ridiculously high…

But, if I left it empty I could shred that thing on my skateboard!! Hmmm…

Beautiful design, though $55,000 for the basic design (without washroom and kitchen) is pretty pricey. Another criticism would be the 3-4 carpenters needed to assemble this once delivered.

This unit looks like the 1960s travel trailer I sold to a friend for $400 and it doesn’t even have insulation. Back to the drawing board I say. And whom are they planning to bill 55k when this unit gets used as an emergency shelter? The US government? Haha!

I agree, 55,000 for that little uninsulated and unequipped thing is ridiculous. And it takes 3-4 people, “several” days to build? Equally ridiculous.

Now, a real tiny home that costs less than $10K, comes in a kit, and can be built by a single person on his own in a day or two, now that would have a market.

“Now, a real tiny home that costs less than $10K, comes in a kit, and can be built by a single person on his own in a day or two, now that would have a market.”

As would money trees, and cars that run on happy thoughts.

The poster is not saying this would be possible today at the current prices, but 55k for a single unit would be like paying 4383.00 (roughly) a month to rent a garage or back yard shed.
And the way the walls curve would be furniture “unfriendly”

Cars don’t run on happy thoughts, but who of us older folks would have thought 40 years ago that any of them would be running on batteries?

For a look at the shelter one units, visit
http://www.shelter-kit.com/kits.php?kit=unitone

Too expensive and they wasted more potential floor space with the curved floor corners. Stupid, but pretty.

Well, the under 10k tiny home is already here: There are panelized garden sheds out there, and they are built well enough. You usually have to drop a good bit extra on utilities and interior finishry. A small kitchen and bathroom can add many thousands of dollars to any shell.

I also don’t usually balk at the prices of tiny homes. But this really isn’t a home. And its hard to imagine how it could fit a kitchen and a bathroom, or even just a kitchen and a living/sleeping area. There are full-size homes in thousands of towns across the country for less money than this that wouldn’t involve mining metal in order to construct. This one isn’t just overprices, it’s outrageous. Yikes…

[…] more about the House Arc. /* This entry was posted in Design, Kit, Prefab and tagged Bellomo Architects, […]

My concern, besides the price, is the lack of insulation plus the high thermal conductivity of the metal framing. This unit is not designed to experience extreme weather conditions.

I wonder if the gullible love buzz words like “green”, “evolution”, and so on. I really hate to say this, but the emperor has no clothes.

As much as I like it, I was thinking it would be costly perhaps in the range of $20,000 but $55,000 is really too high! It defeats the purpose of living simple and inexpensively.

I’m afraid I agree with most of the comments here. I could buy a 800 square foot yurt for more than half that and use the rest of the money for a full bathroom and kitchen and furnish it, build a deck and install solar power. Sometimes I think these guys are a bit clueless. But then they are most likely gearing to a more well heeled crowd.

Gone kind of heavy on the expensive sheds lately, and very light on the actually houses- if there isn’t much genuine Tiny House stuff around at the moment, maybe worth looking into profiling some more small appliances and kitchen facilities/layouts, or composting bathroom stuff or something actually worthwhile. Limit the sheds, though.

Its elegant for sure, but where is the plumbing and ventilation? I agree with the other commenters that it is too expensive for what you get.

The current price is not realistic for the market that this was designed. Even at half the price, you would still need basic items, like a kitchen and a bathroom for this to be even feasible. While I like the streamlined design, it is just not practical.

There’s no useful space in that thing. It’s pretty much all in the areas traffic areas. There’s no wall space, either. I don’t think you’d be able to attach anything to those curved surfaces. So, basically, it’s one of those ‘ego’ pods. Cute concept as long as you don’t actually need to rely on it for anything other than providing a place to sit and read while it’s raining.

As for disaster housing – please – 3 to 4 people and a few days to put up a $55,000 gazebo? I have a Coleman Instant Tent that goes up in 2 minutes, is full height, sleeps 6 people, is 4-season and costs under $200. It doesn’t have plumbing or bathroom either, gee.

This is the antithesis of what the tiny house movement is about. Does anybody else find this offensive? Who can afford this virtually useless thing and what will they do with it? In tough times, trivial and indulgent excess is just not excusable. Big thumbs up to Phyllis for her tent analogy. It’s right on the money (no pun intended).

Pretty much just an expensive gazebo. The only thing I find interesting is the second roof concept, not fully realized here but hinted at. In hotter climates it helps with cooling.

The curved walls are not functional, so the usable floor space is – what – 1/3 of its width – most of which is the entranceway. The commentators comments that this can house the homeless, house the military are laughable. The space available can’t be utilized except as space.

I will never begrudge how someone spends their money. If one finds $55k worth of value to them in this structure and has the funds to purchase, it is not our place to criticize their choice. I think the structure is lovely, but to me it is more of an art piece, not a usable housing alternative.

This is a fairly good example of form over function. It is a beautiful, useless, expensive thing.

I appreciate that this blog includes a wide range of fun tiny structures. If this blog was limited to only what I can afford or think iss useful then many would miss out on what inspires them. Inspiration is why I come here. I often see one aspect of a house in a post and think I want to do/ make/ have that in my tiny house someday! Even though I wouldn’t and couldn’t buy this particular structure i’m glad this blog bothers to post so much variety.
Thank you!

I agree with Phyllis and her tent.
I just don’t see 55K anywhere with this unit. On the upside, it is cute.

In Pittsburgh we would call this a bus stop shelter.

Art in it’s purist form, this is a piece of art most would simply call insane simply because of it’s price. With that scant $55,000 and up price, why not get an Airstream travel trailer or better yet just build pretty much ANYTHING else. For those who’ve got more money than they can burn, it’s certainly unique, but I doubt you could add any type of toilet/shower facility and yet have enough room left over to take off your shower cap. This time the idea is plain goofy – but gee it’s cute:)

Silliness. Wasted floor space, no insulation whatsoever, impractical on so many levels. It looks nice but looks aren’t everything. Practical AND beautiful is the marriage of perfection that makes something useful and good for your soul.