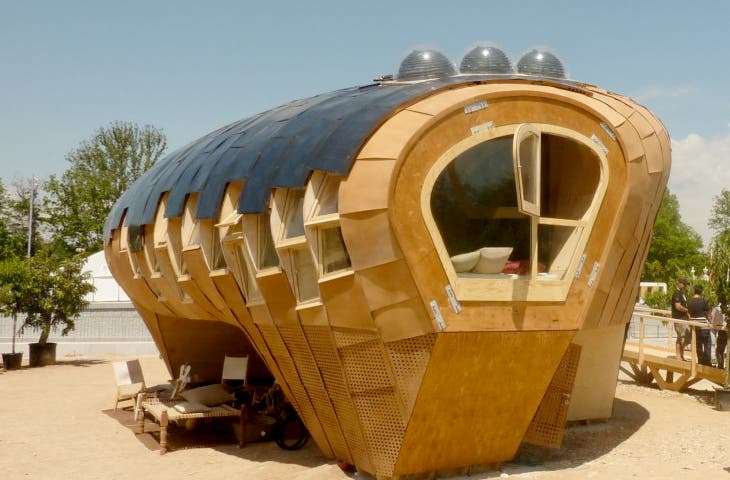 A house designed to act like a tree has recently won the Solar Decathlon Europe people’s choice award. The Fab Lab House, created by the Institute for Advanced Architecture of Catalonia (IAAC) was visited by over 20,000 people during the event in Madrid, Spain. The Fab Lab House uses the sun, water and wind to create a micro climate that passively optimizes the basic conditions of habitability within the home. The house was designed to act like a tree that captures energy with its solar “leaves” and sends it down to its roots, where is stored, shared, or returned to the house to produce the fruit of electricity. The house contains a “domestic metabolism” that provides a detailed real-time monitoring of its behavior and its interaction with the environment, creating historical profiles and sharing them socially.

The design of the Fab Lab house has been compared to both a boat and a peanut and has been called a “cinnamon submarine,” “forest zeppelin” and a “whale belly”. The house has also introduced significant technological innovations such as the world’s most efficient flexible solar panels, made with both Spanish and American technology. The project involved architects and experts from 20 countries as well as experts from MIT. The interior is composed of an integrated social space with a bedroom, kitchen, a small Fab Lab, a bathroom and a small elevated room for guests. Living Safely in a House of Steel

Where’s the kitchen? Sorta neat in a strange way.

Angie, it looks like the kitchen is on the left of the living area as you look toward the loft.

Thanks, after looking past the reclining girl and the other, I think I see a frig.
I’d like to see what the kitchen really looks like, after all – they did show the bathroom.

totally different, totally amazing in a strange sort of way. When I first saw this ‘house’ I was immediately drawn to it because it is different and being different sometimes works.If you like your square or oblong box, ok by me, this idea needs work but it is the difference which works for me.I will follow the further development of the fab lab.

Interesting interior — could be fun to live in so long as it doesn’t tip over in a wind. It looks a little top heavy but maybe that is counter-balanced by the way it is attached to a foundation or whatever.

This is an exciting, visionary home of considerable style. I’d love to see a lot more interior pictures and specs, and learn about buying options. Thank you for the work you do to better our lives and planet. With great regard…

That’s very neat. I’m used to dealing with one-room LDK (living-dining room-kitchen) arrangements so that is fine. Solar cells on a curved surface is also a cool setup.

In my book, one of the most visually stunning and far thinking alternative structures to grace the pages here. Bio kinetic or living homes are the future.

This is SO cool! One of a kind, I presume?

I love this, my favorite so far. I agree, this is the future.

That is one interesting concept, though it probably needs further refinement. I bet you could do something similar with ferrocement or papercrete or some other material as well. My granddaughter says it sort of looks like if you added a tower for a head you could make it look like an animal for a bit of extra fun. Solar panel roofing is a brilliant idea.

A cool design, but I can’t help but temper it with some other considerations. For Example:

* Top heavy design requires a strong foundation, requiring an expert to design. To me, simple designs are a tiny house staple). They can be funky, but should still be
* Curved plywood construction is labor intensive, forces the use of chemically treated lumbar (plywood glue), and leaves a lot of uneven surfaces that can be horrid to properly waterproof. It’s also difficult to get the curved rafters to line up properly, causing a lot of extra trimming to get it to fit just right.
* apparently 0 insulation, inappropriate for both hot and cold environments.
* greenwashing. Putting words in quotes does’t change the fact that it’s really just a standard commercial solar electric installation.
* Costly decisions. While cool, flexible panels are usually several times the cost of conventional solid ones. That seems like wasted money to me, even if it is used to great effect.

I wonder if it floats! One other wooden structure in history did…AND, it also had curved wood. I’m not sure they had “chemicals” back in Noah’s day! 🙂

Nice concept. Great style – on the outside. Those Catalans sure can create architecture! I wish I could say the same thing for their interior design! Those carpets, furniture and accessories remind me of a college dormitory.

The price seems reasonable for this, though.

Fascinating! (Although obviously not a to-be-lived-in model with the open end and stairway.)

I wonder why the bathroom is so dark? Seems like it needs some windows.

Methinks the designers behind this were inspired by old Roger Dean album covers. Maybe they should get Jon Anderson to promote the project.

It is really cool looking. It definitely stands out and that is one of the reasons I like it. 🙂

[…] during the event in Madrid, Spain. The  house can use the sun, water and wind to create a micro climate that passively achieves the basic conditions of habitability within the […]

Speaking about that style in Spain… It’s inevitable to mention Gaudi. Looks familiar…

The bathroom walls look like soapstone, partial treated–with wax or some other application–to bring out the color of the veins. Beautiful! We have soapstone counters, sink and backsplash in our kitchen and are planning on using it in the bath as well. It is a great DIY stone–my husband and his dad cut the counter slab themselves, and I cut the tiles for the backsplash (and I am not very handy!). It is a “living” texture, so will scratch easily, but also recovers nicely (just oil and you can’t see any scratches) and it is a chemical-free counter that is very easy to live with (does not stain, can put hot pans directly on it).

Soapstone is very dense, so would not be as practical for the little movable houses–but for those who enjoy “real,” nature-based building materials, consider it. It also works amazingly with any style of house, from historical to modern.