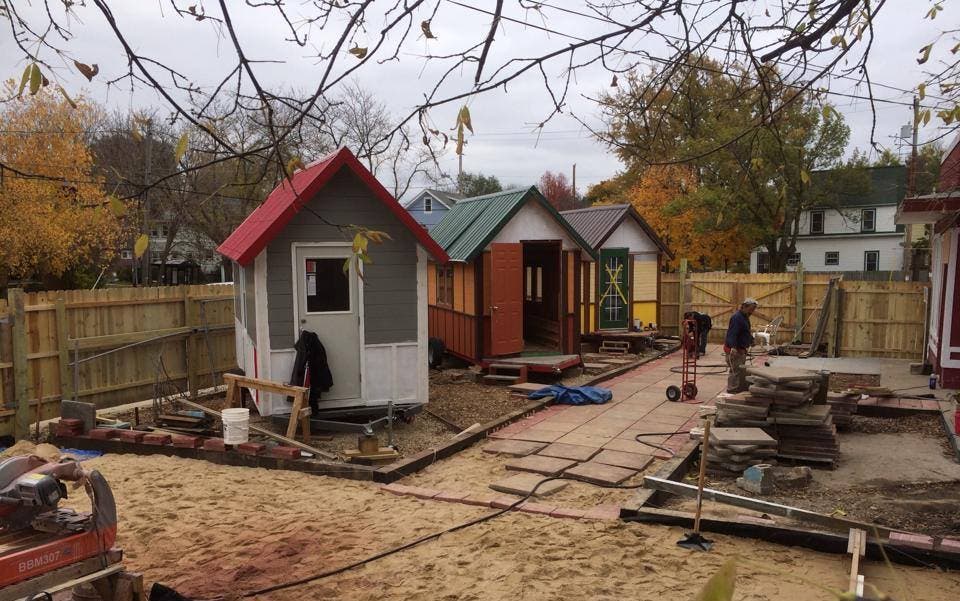 This last weekend the Occupy Madison organization made another step forward in integrating tiny houses and the homeless in an effort to keep people off the street. The Occupy Madison Inc. organization had a ribbon cutting ceremony on Saturday for the new Tiny House Village in Madison, WI which has seen a seven percent increase in the homeless population over the last four years. Occupy Madison, with help from numerous community groups, has built nine tiny houses, a day resource center, laundry facilities and a community gardening space in the village. The 96 square foot homes are made from reclaimed and recycled materials and include a bed, a toilet, propane heat and solar panels for electricity. Each building costs around $5,000 to build and the money was raised with private donations. “Rather than taking people form the streets and putting them in a building, we thought we could work together to create our own structures,” says Luca Clemente, with Occupy Madison for WKOW in Madison. “We don’t give houses to homeless people, we enable people to build their own houses to create their own futures.”

The village is located on county owned land leased for $1 a year to the nonprofit organization that developed it. The developers won approval from the city for their plan with the assistance of a local Unitarian-Universalist congregation. Donations for the current homes came from local business that included Friends of the State Street Family, The Bubbles program, (which provides free laundry services to the homeless), OM Build, Homeless Ministry at Bethel Lutheran Church, Madison Street Pulse (a cooperative homeless newspaper based in Madison WI). I would think so. I think programs like this are often aimed at not JUST getting people off the streets and into a home but helping teach them some skills and giving them some investment in the space they will be living in.

Fantastic idea! So extremely functional. The thing I liked best was the involvement of community, government, developers, church, neighborhood & the homeless. The great thing is the cost is minimal. Way to go! I’m sending this off to our local Municipal Government who are looking for cost effective ways to provide homes for the homeless.

We need to make this happen in California! We are third in the nation for number of Homeless children. Like the innovative idea of building a skid with temporary wheels to move them around. Saves a lot of money over buying a trailer.

Great idea.
Where do they shower?
How do you chose who gets one?
Are there any rules in the community?
How long can they stay in one?
Can they have a hot plate?
Is there any running water in the house?
Can we see inside one of them?
Thanks

Most of those questions, as well as a few interior shots, are answered on their website: http://occupymadisoninc.com

Heeeeeeyyy, I had that idea two months ago 😛 (Just messin’. I’m like that.)

This is actually pretty great stuff IMO. I’m gonna send this article to a couple folks who might be interested… way cool.

In fact, we need more stuff like this. I wish we had affordable housing around here (middle of NC).

Brought a tear to my eye. What a beautiful act of kindness
!!! I hope a project like this comes to Toronto, Ontario, Canada

just wondering I you might have a used one that I can get and put in there. I have a little money saved up and i want to get away from landlords. thanks…