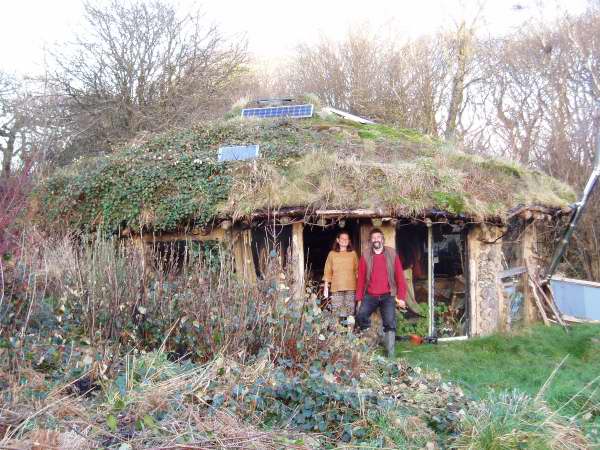 This roundhouse, built of cordwood, cob, straw and recycled windows, is located in southwest Wales and owned by Tony Wrench. It’s not only a low impact, natural dwelling built with what was on hand, but it’s become a symbol for the rights of natural builders within the United Kingdom. The house was built in 1997 by Tony and featured solar power, a wind turbine, composting toilet and reed beds for gray water. Tony based this house on American Indian designs he had seen in history books. In the past, he had had experience building “wacky structures” and wanted to live as close to the land as possible. Even though he built it inside Pembrokeshire Coast National Park, with agreement from the owners of the land, he never got permission for the structure from the local planning board. After several court appearances, he and his partner, Jane, decided to demolish it in 2004, but changed their minds after public demonstrations persuaded them not to. The Pembrokeshire Coast National Park Authority attempted to get a court injunction to force Tony to demolish it, but were persuaded to allow it to stay up until July 2006, when they could re-apply under the new Low Impact Policy. In 2008, the committee voted to give Tony a conditional for three years. So – the roundhouse still stands. The house cost £3,000 (about $4,700) to build and is located on the edge of a wider sustainable eco-village. It’s about 6.5 meters (21 feet) wide. Tony and Jane try to get 70% of what they need from the land. They grow their own food, make wine from local berries, use a composting toilet, collect downed wood to make woodcrafts which they sell, and their water is piped from a mountain source and heated by a woodstove. Electricity comes from three photovoltaic panels on the roof and a small (200w) wind turbine situated about 70 yards away in a field. For cooking they use an old gas caravan cooker, the woodstove and a dutch oven. Guests sleep in another roundhouse called “the Den” nearby. They live on several hundred pounds a month and have no bills. Wrench has a book for sale called “Building a Low Impact Roundhouse” on Amazon.

“We are not going to survive in these numbers for the next few hundred years – people will have to live a lot simpler.” -Tony Wrench

This reminded me of iron age Celtic roundhouses, so I looked it up on Wikipedia and found a picture of That Roundhouse included. Much better light in the modern version.

That place rules! Everyone should take a lesson from this…

My hat is off to Tony and Jane! This article is best summed-up in one word .. WOW!

What’s the r-value of the walls and where is your source for water?

I think this is great especially the two cats cuddled up. Shows a comfortable contentment. Its good for you that you changed your minds on demolition . I see nothing wrong with your little place and everything right. Good for you.

Well done for persevering and hats off to you all for creating such a lovely abode. I only wish I could do something similar but living in the UK with all our regulations, seems an impossible dream!

It’s disturbing to me that the Code people are flexing muscle — all the more so when their entire reason to exist, the reason for which We The People gave them authority in the first place, is to protect “Us” from dangers. Obviously this house is not dangerous. OBVIOUSLY it is not unstable. So what real basis do they have to prohibit it at all, call for its removal, OR give just a conditional permit for a limited period of time? I know, it’s not the States, but it’s still the same concept. Why do they continue to have the power to tell people what they can and cannot do like this?

Any update on if Tony’s home still stands…?