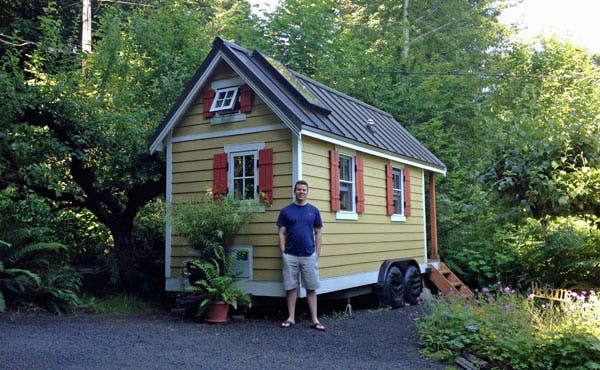 On a recent trip to Portland, Oregon, I ran into Ross Lukeman of the blog, Alternative Homes Today and we chatted not only about tiny homes, but about his architecture career and interest in alternative ways of design and construction. His initial interest in tiny homes derived from attending a Tumbleweed workshop with Dee Williams in his home in Houston, Texas and he decided to start a blog covering various tiny homes, natural building techniques, interviews and building companies. “As I began covering them more and more, I became interested in building one for myself,” Ross said. “As someone who’s almost done with school loans, I’m not wanting to turn around and mortgage my life to another bank.”

The blog also reaches beyond alternative or tiny homes and natural building to cover bike commuting, finance, landscaping, clutter and material possessions, minimalism, DIY projects and even some comics. While Ross covers a wide range of ideas, he is most passionate about homes that match the value of their occupants.

“As obvious as that sounds, I feel like a lot of us are struggling with this, our homes being out of sync with what we really want in life,” he said. “Which is why it’s great seeing people embrace the “enough” principle with tiny homes and pursuing what really ignites their passions in life.” The Myrtle at the Cob Cottage Company near Coquille, Oregon The interior of the Myrtle at the Cob Cottage Company

Ross has been traveling around the country visiting various tiny homes for the blog and at this point his favorite designs are the Tumbleweed Cypress 24 Overlook and the Michael Reynolds Earthships in New Mexico as well as rammed earth homes.

“(The Tumbleweed) model has a huge great room in the front, which I would could use as my home office and workshop,” Ross said. “I like the 24 foot tiny homes because they have enough extra space for you to change functions and add people in the future.”

“With the Earthship, I really like the idea of homes handling all of the systems like energy production, waste processing, food production, etc.,” he added. “I know some people get caught up with not wanting to use old tires in their walls, but I think this all-systems thinking is where homes need to go in the future. It’s more sustainable and it gives the occupants way more control.” The Tree House, made of reclaimed materials in a Bois d’arc tree by Dan Phillips in Huntsville, Texas

Ross thinks the future of tiny homes will continue to grow and gain awareness primarily in the field of tiny homes on trailers and traditional building—but just smaller. He mentioned the micro apartments in New York City and the interest of ADU’s (accessory dwelling units) in Portland.

“I think the trick will be getting tiny homes into urban settings like this,” Ross said. “We’ve become way too dependent on cars and parking tiny homes away from everything because municipalities don’t know what to do with them will have to be a hurdle we overcome. I believe once the more progressive cities integrate them into urban settings, other cities will begin to follow their example.”

“We should also be seeing more tiny home communities,” he concluded. “I know Jay Shafer’s community in Sonoma County, California is underway. Apparently the county planners are as excited about it as he is!” I want to see more alternate architecture. So many are pushed into unnatural apartmentsvwhen most of the land us empty.

Out of curiosity, Rebecca, I get why you might prefer to not personally live in an apartment, but why would you not want others to do so? Also, how is apartment living any less natural than a single occupancy dwelling? Just curious.

Hi:
I too am in the process of getting off the grid and getting back to the land. I am looking at all sorts of options and unfortunately finding a lot of road blocks!!! I wrote down some of the most important objectives to me so that I could begin to focus a little more. They are: Land, economical, sustainable, permaculture, farming, pets, gardens, nature, sharing, close to cultural events, yoga, back to nature.

In all honesty, I don’t believe I can live in a small house on wheels but think they are really cool. The premise behind my objectives is to obtain a fairly large parcel of land, small house on the property, and a couple of greenhouses so I can farm year round. I would also like to have some animals around as pets…. not to eat. I am not all that concerned with architectural designs as there are so many obstacles to building a small house legally and zoning restrictions so I am likely going to opt for a very small modular home, 10+ acres, and small barn!!! Anyone want to join me?

Sounds similar to my hope/plan. Were r you looking for land that won’t be confiscated via Agenda 21 or Clive Bundy style? That is my only concern. I was driving through an area with lots of land today, and saw many lots that used to be out in the country but now had malls or apartment complexes on the next lot. So in the area I was looking in (Manville, TX), even 50 acres does not guarantee you will be in the country for long without city life encroaching.

I am totally in agreement, Scott, and would like going in on some land with someone else. But where are you, and where are you looking for land? My husband and I are both about to retire, and would like to have a piece of land to build a small cabin by ourselves. Still undecided to go tiny or bigger, about 700sq. ft.

Patty, i bought my land from ozarkland.com nice people to deal with and parcels can be bought on time thru them, good luck, hunter

This was interesting, thanks for sending it. I have a question about the green (literally) roof of the Myrtle. The pic on the inside appears un-insulated, just bare boards holding up (presumably) the dirt the greens anchor in. Early settlers who lived in “soddies” sewed long pieces of calico to cover the inside of their dirt roofs in order to keep snakes and other creatures from falling into the soup pot. So what’s keeping those surprises out of the Myrtle?

Hey Carol, great question! For the Myrtle they covered the framing members with wooden slats, then overlaid them with a black EPDM pond liner. The pond liner keeps everything waterproof and the turf keeps the UV rays off of the liner.

In some instances they sandwich foam board insulation between the wooden slats and pond liner. In other cases they will attached slats above and below the structure and fill the cavity with insulation (sometimes sheep’s wool). I like the way they did it in the Myrtle though, with the framing members exposed.

I guess the soddies could have used a pond liner!

I too want to have a little house, a bit of land for gardening, chickens, living off the grid as much as possible, and living simple. Also frustrated with the hang ups. I do live in Portland, so hopefully here, things get easier. I agree that it would be cool to have little neighborhoods with Tiny houses. Positive thoughts that all this happens soon. Positive thoughts to those above who want it too. Namaste

Shell, this sounds great. In my experience, Portland is a great place for innovation in housing. Good luck getting over the hurdles towards your goal!

Check with your local building and code department prior to any moves in that direction . I suggested that to you, only because the city of Salem, has already said no to tiny homes, there may be others that I am not aware of . Good luck, wishing you and others that are embracing the idea of tiny home ownership, all the best .

Since we both live in Houston, Texas, I’ve been trying to connect with you.
ragsdalehomes@gmail.com
Jay
281-960-9494

Thanks for reaching out Jay, I will be in touch.

Could you provide images of the interior of the domes?

Hey Di, I don’t have photos of the interiors of these particular domes, but I wrote an article on Natural Spaces Domes, and have a bunch of interior shots here: http://alternativehomestoday.com/blog/geodesic-domes-an-interview-with-dennis-johnson/

I love this idea. There are so many people paying taxes on homes while the people who run the country are busy funneling the money into their pockets or to help pay for the slackers. Like the Yoga tax. Who the hell thought that one up. With one of these, you could live anywhere you like and be gone tomorrow. And the concept could be taken by the Feds to build bunches of these and provide free housing to immigrants. It could all work out fairly great. If you have an annoying neighbor, hook the house up and go to the south for a while. Very cute.

Hi Ross, interesting blog and as such, I was curious what your opinion was about RV’s.
I bought a 2002′ Nash 22H RV which being a 8′ x 22′ – is probably in the 100-150sqft range of living space. Can tie into available utilities, or boondock for periods of time. It costs $5k and as long as I get on the roof once a year to caulk for leaks, it should last for many years. It’s not fashionable, hip, nor trendy…. but it is cheap, functional, and livable for less than my parents paid for their kitchen countertops.

Granted… you can’t beat a tree-house at any cost!

Thanks GDUB. I have been looking into RV’s myself lately. I recently read the book by Robert Wells about living as a vandweller. The RV sounds like a good idea to me. I think the main difference between that and say, a tiny house, would be how well it could blend into a normal neighborhood. Of course with the RV you have greater mobility and as you said, a lower cost. The RV definitely sounds like a good option!