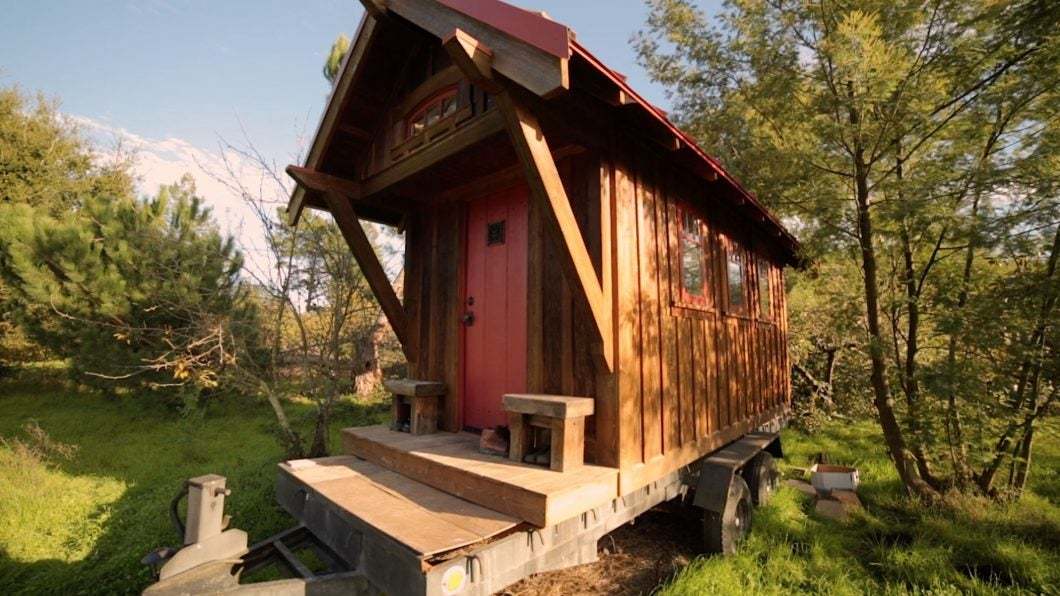 “My hope is that with a little bit of financial incentive, hopefully less than $100,000 per unit (compared to $500,000 per apartment development), that we will spark a series of new industries in California that will make tiny homes, efficiency homes, cargo units, tent cabins the norm — not just the exception.”

Also, stated that traditional affordable housing is still needed, but tiny homes should serve “as a clear alternative, especially as we are trying to address the fact that 90,000 Californians are unsheltered and homeless.”

In the article, there’s not much enthusiasm from the community stakeholders quoted. It appears they do not have a clear understanding of tiny housing. In fact, their comments highlight the adverse effects of mixing up terms, using “tiny house” interchangeably with “micro shelter” or “sleeping pod,” etc. One is a fully-functional home and the other temporary shelter.

Both have important roles to play, but correct terminology needs to be consistently used to eliminate confusion around the differences between emergency or temporary shelter and permanent housing solutions.

“Tiny House” is a codified term now. There are multiple types, movable and site-built on a foundation. Both include all daily living essentials. Without power, water, or a bathroom, it is not a “house.”

With California in just a dire need for housing solutions, a wide variety of options are needed. They can be implemented used as fill-in-the-gaps solutions placed on church properties, backyards and agricultural properties.

Urban infill opportunities might be the most practical for tiny housing across California. While, of course, not all backyards will work, but many will, in addition to small vacant lots. Every city has odd lots that can’t be used for much.

Tiny housing isn’t the only answer but can sure help. To solve the crisis, no housing stone should be left unturned.  This is especially poignant today, on the anniversary of the most destructive and deadly wildfire in California history.

It is incredibly heartwarming to see tiny house initiatives being implemented by nonprofit initiatives like Tiny Homes for Camp Fire Survivors, as well as, the American Tiny House Association and many others. Their efforts bring BIG awareness to government representatives across the state, like the Sacramento Mayor.

While I admire the motivation behind this, and the need to get folks off the street, I am astounded that there isn’t a plan to have this bid and done for much less than $100K per unit. These do not need to be fancy, designer-trimmed units – they need to be tiny homes that give someone or a couple, a bed, a place to cook, sit indoors in the dry and warmth, a bathroom, and really not much more. Of course, this being a government-funded project – there will be a requirement for each unit to be ADA-compliant, etc… If the standards could be relaxed for these units, that money should be able to house many more of them. $30M housing budget for 300 units? $100K in some parts of this country will buy you a ‘real’ house. Tuff-Shed and other similar companies can provide a 16×24 shed for about $10K for a backyards. Even without negotiating a bulk-discount, $5M would get you 500 of these. If you budget another $30K each to build out, insulate, plumb and basic electricity, a stove and heater. that should be realistic. Now, at $40K per unit you’d have 750 dwellings. Even at that number, it’s a small dent in the homeless problem, but it’s 2-1/2 times the dent.

We live in a 2013 energy star manufactured home. I believe this industry could easily make economy size units very affordably. We do not need to reinvent the wheel, per se. Manufactured homes are actually real houses.
The only reason they never became more popular has to do with restrictive zoning laws that prohibit them in most cities.

I think manufactured housing can truly help solve California’s housing crisis. But we need to examine zoning laws at the same time.