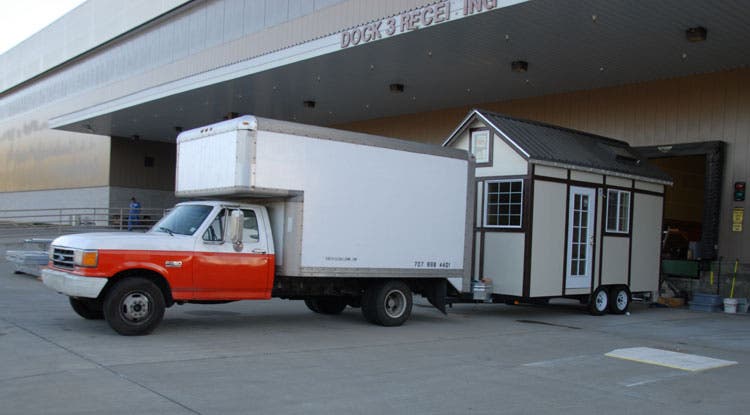 Yesterday, October 29, 2008 I had the privilege of joining Bill Kastrinos of Tortoise Shell Homes in the delivery of a home in the coastal mountains south of San Francisco. I met Bill at the Tortoise Shell Nursery located in Rohnert Park, California. I took a few pictures of the Nursery to show you what goes on at Tortoise Shell. We than planned to stop at the Golden Gate Bridge to try and get some good pictures of the home with the bridge in the background as well as the bridge crossing. I followed Bill in his recycled diesel U-haul truck, which he has restored and is using to deliver homes in this part of California. This is the 7th of 8 homes that he is delivering to a remote area in the Coastal Range south of San Francisco. I’ll explain more about our destination in part two of our journey.

Bill had to maintain a speed of about 55 miles an hour with the load he was pulling. I tagged along behind until we reached the Golden Gate Bridge. Unfortunately, the bridge was covered with a thick blanket of fog, so we were unable to take any pictures of it in the background. I decided however to go ahead and see if I could get a picture of him crossing the bridge. Just maybe the fog would break and we could get a decent shot. As you can see in the picture below the fog did not cooperate.

We than drove through San Francisco via 19th Street and onto Highway 280, and continued on to the Half-moon Bay turnoff. From there we climbed into the mountains. We took a break for lunch at Alice’s Restaurant in Woodside and than continued another hour to our destination.

Be sure and come back for part two as I show you placement of the tiny house and a tour of some of the tiny homes already in place. Galapagos ready to be assembled on a trailer. Crossing the Golden Gate Bridge in the fog. Climbing into the Coastal Range. Driving through the redwoods to our final destination.

Things To Consider When Renovating a Tiny Fixer Upper

Bringing a Tiny Human to Your Tiny Home: How to Prepare for a New Baby

Kent the photos look great! I can’t wait to see the photos of the little village of tiny houses. I know it was a long day but it looks like a lot of fun.

It was a fun day and other than the fog not behaving at the bridge a very enjoyable ride through some fantastic country here in California. Will get up part two before to long so stop by every now and than. 🙂

[…] told me a while back about this day trip he was planning to take with Bill. Kent Griswold runs TinyHouseBlog.com and Bill Kastrinos owns Tortoise Shell Home, a tiny house company in Sonoma County, California. I […]