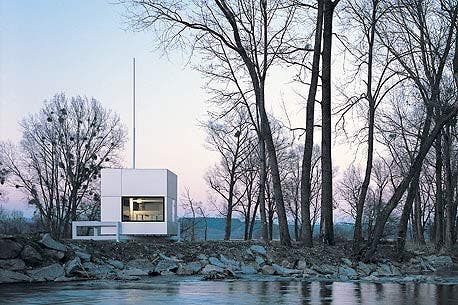 Shireen Qudosi wrote this article for the Tiny House Blog and will have a couple followup ones in the next few weeks, so stay tuned. Shireen’s bio is at the bottom of the article.

In a super-sized obsessed age, we’ve now fallen into the gap where we believe our home should also reflect a shift toward the grandiose.

Yet this obsession with gigantism has completely dwarfed our sense of self.  Whereas even meals used to be an art form, the rising trend on bigger (and ultimately considerably ridiculous creations) is aimed at promoting a consumer culture that ironically strips us of culture. Some would even argue that in addition to relinquishing culture, we rescinded our identity as we grow increasingly lost amidst a rising expanse of materialism. With consumer culture, it’s no longer about what we have, but about how much we can stuff into ourselves, pile on ourselves, and collect around ourselves.  An inflationary ideology that compromises quality for quantity, the idea that more is better and less is miserly can be traced back to Hollywood and celebrity, two groups that promote a culture of excess that majority of star gazers flock to emulate.

Yet an undercurrent movement referred to as “small living” is creating waves as a chic counter culture against wasteful consumption.  An increasing number of global citizens are realizing that bigger is not better, that more is not necessarily feasible, and that a continued practice of parasitism is not in our mutual interest.

This all began with a green movement, ironically enough kindled by the very same group that initially made it popular to be wasteful. It was Hollywood and celebrity that made it trendy to be environmentally aware, and while they were not the first group to practice earth-friendly habits, they are the group that got it mainstream attention.  Still, the green movement has taken off considerably since its infant days where recycling was the height of eco-culture.  The newest trend is in sustainable living, a striving effort to live a lifestyle with a minimal or reduced carbon foot print.

Thinking green has spread a new leaf.  While in the early stages of sustainable living, eco-friendly decisions centered on what could be different in the home, the trend now is to change your home itself.  Quickly gaining momentum, the small living movement is leading a greater number of people to realize the personal and communal benefits of conscientious consumption.

From small houses to yachts-turned-homes, people across the country are completely rethinking their approach to living.  And with the rise of do-it-yourself shows and home makeovers, we’re all realizing that we can have the comforts of a larger home, even the aesthetic appeal, without having to scrape out our wallets for that last little penny to fund it all. Whether it’s a boat, mobile, or studio living, the fact is a majority of Americans are downsizing their dwelling space.  This in light of the recent recession mixed with a rising awareness to cultivate positive eco-friendly living solutions, has left the market saturated with a number of alternatives to conventional living.

The emphasis here is not just on saving the environment, but also on saving a green resource of another variety.  Conscientious about carbon foot prints and wasteful spending, many global citizens are down scaling from a humble abode to perhaps an even more humble abode in an attempt to salvage hard-earned dollars.  With that, the trend these days is perhaps not even just to get a smaller apartment, but to get the most compact home possible for your lifestyle.  The idea of compact living has not only gotten many people to downgrade the number of services they use (i.e. cable, internet, dry cleaning, gourmet coffee), but it’s also raised a new crop of spatial economists that have traded in expansive lofts for more resource-friendly spaces. Small living is simply much cheaper. It’s cheaper to furnish your place, utility costs are lower, and smaller spaces are generally much more affordable to rent or purchase.  It was Leonardo da Vinci who first said, “small rooms discipline the mind and large ones distract it,” – and perhaps he was right.  Surprisingly, there are a number of other benefits that go with smaller spaces, which anyone who’s walked the walk will quickly recognize.

Small living also undoes the idea that your home is your castle. While it remains true that your home is your sanctuary, those living in larger estates are less likely to explore their outside environment.  As such, what was once meant to be a castle becomes a cage that keep dwellers locked in, even if that condition is self-imposed.

On the other hand, a smaller home encourages you to get out, be more social, and explore your outside environment.  Smaller spaces allow for more creative design ideas, in which your home becomes an authentic reflection of you, as opposed to larger homes where the home somehow becomes a fixed museum that dwellers and visitors have difficulty engaging with.

Ultimately, the key is sustainability.  If small living isn’t your cup of tea then the next step is to look into how you create a sustainable environment in your home, no matter what its size.

Shireen Qudosi is an LA-based writer with a passion for sustainable living. Recently teaming up with Air Conditioner Home, she works to help consumers maximize their eco-awareness. To contact her, email shireen@air-conditioner-home.com

Hey Kent, did Shireen write this for the Tiny House Blog or did it appear somewhere else first? I’m a bit confused…

Hey Kent, did Shireen write this for the Tiny House Blog or did it appear somewhere else first? I’m a bit confused…
BTW I love your blog!

wow what a great article! my neck hurts from nodding so much lol!

Hi Amanda – Shireen wrote this for the Tiny House Blog but has also posted it on her own blog. I’ll put a note up in the post so people know…Kent

Nice, loves, thanks. One thing? Top picture – my all time fave small house, The Micro – would love to spend the rest of my years in that delightful modern / tech / cube – but alas for this American: price aside, it is a Euro based offering.

Thx again. All of you, your passion, it keeps me going.

[Oh, I think maybe the Micro that was outside of Moma / NYC was purchased by an American, so there is one on our soil. And yes, I shall faint if ever I lay eyes upon it. Kids you not one bit.)

The compressor and the fan are combined in a single unit and mounted in the window air conditioners and this is the source of all the noise in the air conditioner. The other causes of noise could be worn bearings, cabinet rattles, dirty or rusty fan blades, worn rubber mountings and compressor wear.