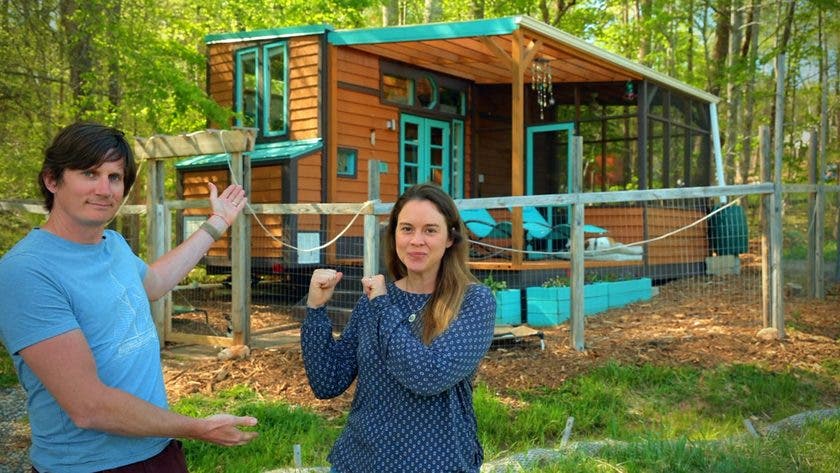 Callie and Nathan, Cranmore Meadows founders, built a truly impressive DIY tiny house named Polaris. It lives large for its extra small footprint. While it’s 20 feet long and a total of 178 square feet (271 sqft with the lofts), they doubled their living space with a detachable deck and screened-in porch. The two parts connect seamlessly, creating an incredible indoor/outdoor lifestyle feel.

Build your own version! Their Polaris tiny house plans are now available here.

Though they purchased Tumbleweed plans, they discarded them early on and went a fully custom route. Callie took the design lead. She came up with an exceptionally efficient, comfortable design. It’s packed with clever features like a little laundry room built on the trailer tongue. Additionally, the section sofa transforms into a day bed and dining space. Their stairs further take the efficiency to the next level. During the day, the bottom step tucks away. They’re full of storage, and a water bowl drawer easily pulls out when the dogs are inside. Also, the steps are steep, but fortunately, both their small and large pups can climb up and down without issue.

Watch the tour of their impressive DIY tiny home:

They dreamed about tiny living for years. But it wasn’t until Nathan got laid off in 2015 that they saw an opportunity to kickstart their DIY tiny house build. It took two years, partly because they paid for it as they went.

“I found an email from 2009 that I wrote to a friend that was some random Tumbleweed model, “had you seen these; this is awesome!” We hadn’t met since 2012. So at least three years, I had been kind of thinking about it…You always used to tell me that when you first told me you were into tiny houses, and I was like, “oh yeah, that’s really cool; I’d be into that.” Because I had lived in Ghana in small spaces on and off for six years, and so he said it was love at first sight when he told me. Oh, it was meant to be. As soon as she was open to the idea, I knew she was a winner.”

She Built a $25k Tiny House and Outdoor Paradise