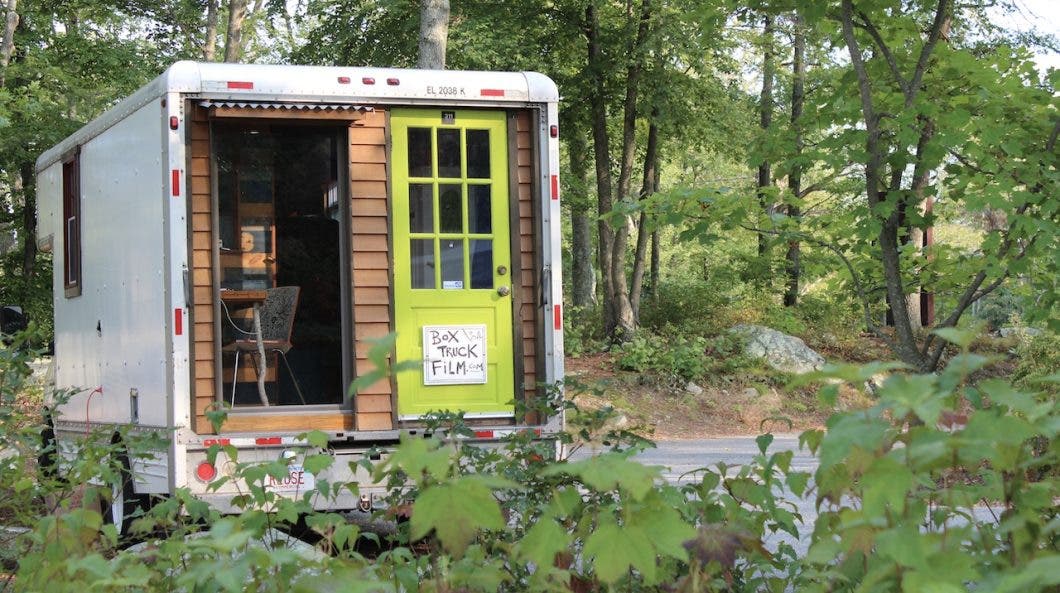 The Box Truck Film is making its official premiere on July 14, 2022, in Brockton, Massachusetts. Please check out the poster below for all the information.

I had the privilege of getting a preview of it and I had a few questions for Derek “Deek” Diedricksen. He took the time to answer them so that I can share them with you in this post.

Alex and you teamed up to make this documentary. How was it working as a team in comparison to doing it all yourself?

Deek – Working with others and having to make co-decisions on designs is always a bit of a challenge as compared to flying solo on a build, but the whole ordeal was relatively smooth and painless once I had the simple list of what Alex needed for his living space. I had known him for a while at that point too, which helped. Additionally, there is and was only so much that could be worked into a 17′ used box truck, which certainly set some parameters- both good and bad.

While I did most of the bigger design and building parts in some cases, Alex was always on hand to do anything that required doing and definitely progressed as a builder by the end of it all. He has a great work ethic which didn’t hurt either. Alex is pretty detail oriented too, so he was great with some of the trim and painting work too. Even though he is an O.C.D Spread-sheet addict, and I’m an A.D.D case that thrives in chaos, we surprisingly didn’t have any big arguments or meltdowns during the whole filming process.

How did Alex discover you? Do you live in the same town?

Deek – Believe it or not our birthdays are one day apart (I’m a day older), we went to the same college, and even toured and worked with many of the same bands, but I never knew the guy until I bought a shirt off off him decades later while he was selling his apparel (his “Stay Vocal” Reuse Clothing Line http://www.stayvocal.com) at a Farmer’s market close to town.

He was working on his first film at the time (“Reuse: Because You Can’t Recycle The Planet”), and we had similar enough interests where he later reached out when he needed some contacts/help on that film (I make a small cameo in it too). When the idea for film two was born, we both hashed up the idea of converting a used moving truck into a home. This was quite a few years back before several of the viral truck-conversion videos were starting to show on Youtube. The idea did, and does, just make a lot of sense.

How many houses did you tour before Alex and you started building the box truck?

Deek – Technically, quite a few, especially if you count all the ones I have seen, filmed, and stayed in over the last twelve years while shooting content for my youtube channel “RelaxshacksDOTcom”. In the film itself you’ll get to see two or three visits in the storyline- the aim being to give both us, and the viewers, some additional ideas and inspiration.

Vera Struck’s tiny house makes an appearance, as does Jess and Dan Sullivan’s in Rhode Island, among others. We even visit a house made of wine bottles in Joshua Tree, California. We really wanted this film to NOT just be a running video of pretty pictures and an already finished “perfect tiny home”, but instead wanted to show people HOW we did it, and for them to get a view from the trenches of what it took to find reused materials, and then make them work in this build. 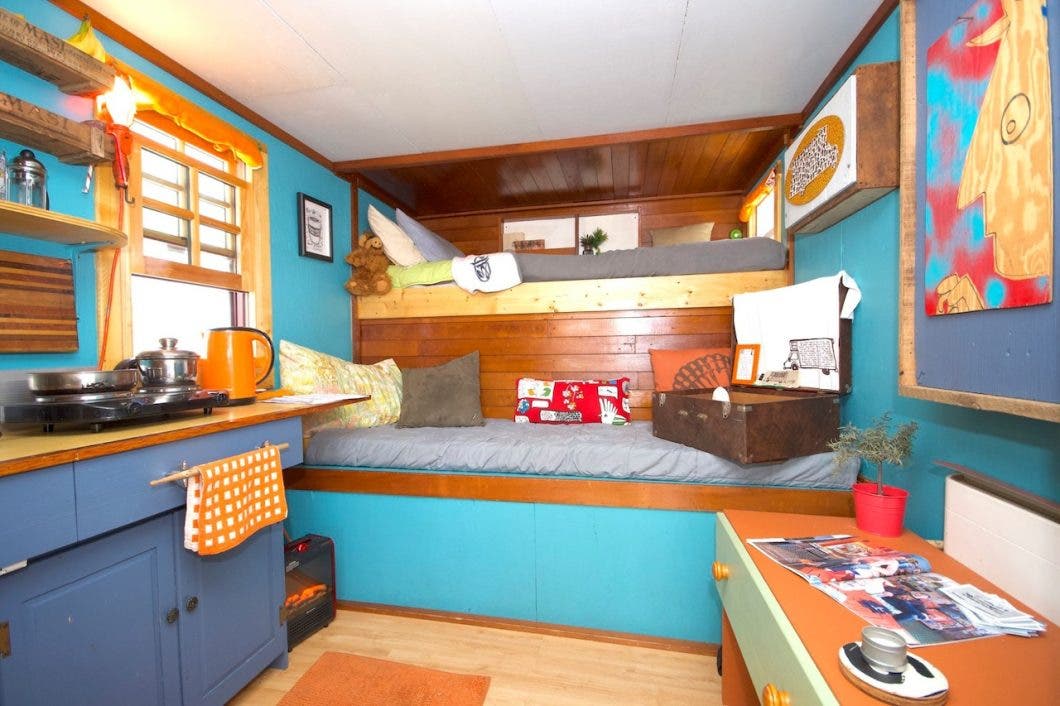 What size truck did Alex purchase?

Deek – Overall this decommissioned U-haul truck has a 17′ box behind the cab, and gave us a grand total of 98 square feet of living- all with a shower, toilet, kitchenette area, two beds, and even a desk and workspace area. Its not a ton of space, even by tiny house standards, but we were able to efficiently pack quite a bit into it.

Where did you find most of your recyclable materials?

Deek – They’re really everywhere if you do a little looking, and once we got word out about what we were planning, people got excited and were more than happy to clean their garages and sheds of stuff they were hoarding, but that they realized would never be used. It was a win-win for both parties in cases like that. Within the film you’ll see just how and where we find some of the stuff and even some dumpster diving action. Salvage is something I’ve long been into and one of my side gigs, and with Alex being a long-time reuse expert, it was a realm we not only knew well, but were very good at.

A decent portion of my income comes from finding and then repairing, or reimagining things. The same mindset applies to all my for-hire tiny house and tree house designs. If you allow yourself to be flexible in your design when certain materials happen to come your way, then you’re going to be in a better place from the get-go. There are some pretty inventive repurpose-approaches in the overall film- you’ll see! Its all stuff we try to cover in our Tiny House Workshops too (Tiny House Summer Camp- YEAR ELEVEN, happens in September in Vermont).

Why does it take longer to build a tiny house vs a large one?

Deek –  I guess that is relative to “how large” a larger house is, but in many cases, tiny houses DO take quite a long time to build. Part of that lies in the fact that as with a bigger home you still need to install central systems (heating, plumbing, etc), and given the fact that much smaller spaces are far harder to maneuver materials in- nevermind the actual space your own body takes up while installing them. You’ll see quite a bit of this in the film. Building a small home can be like “reverse Jenga”. 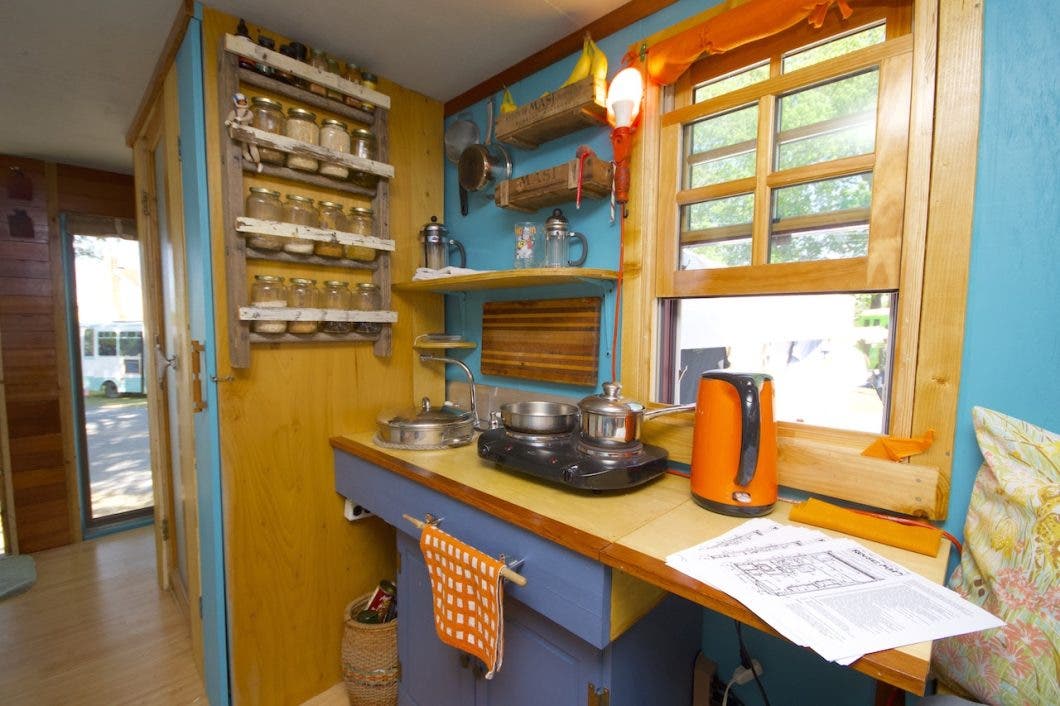 How were you able to get so many other tiny house influencers involved in the documentary?

Deek – While we couldn’t work them all in (I wish!), Alex and I made of list of people we not only respected in the scene, but individuals that would be well spoken on camera, and who had good information and experience to work off. Tiny house stalwarts like Bryce Langston (Tiny House Big Living), Jenna Kausal ((Spesard) Tiny House Giant Journey)), Ryan Nicodemus (The Minimalists), and others lent their voices (and faces) to the film. Others like Macy Miller (Tiny House People), who we’ve known for years, and consider friends, were very helpful too. We’re lucky to have such good people in this scene!

With the van moving constantly. How do you keep it from falling apart?

Deek – Duct tape. No, it was pretty solid to start with, and our interior skeletal and engineered interior work just added to the overall strength of the truck. One risk- the huge window in the rear- was met with a pretty creative solution which we touch upon in the film. How do you keep a giant window from cracking when its continually being jarred while hitting potholes in the road when in transit?

The approach you see in the film is something I came up with on the fly that I’ve never seen done, and years later (and traveling through twenty-five states!), its still holding strong. As with building any tiny house you have to problem solve pretty continually as the builds themselves are unconventional in ways.

How did you get other tiny house artists and builders involved in the construction of the truck?

Deek – Honestly, many of them just fell in our lap and were offering to help once they heard what we were up to. Even my kids appear in the film a few times! Others you see in various parts of the film were some of our crowdfunding backers. As Alex explains in the film, there existed a very strong sense of “community” with this project. We met so many people along the way and nine out of ten times they would ask, “What can I do to help? How can I get involved?” Many of the people we met through the film wound up becoming close friends.

What were the final costs of the project?

The final cost is somewhat of a final reveal in the film that Alex doesn’t like to give out, but let’s just say it is far, far, far, far, less than any might guess. The main expense was the truck itself, of course, but EVERYTHING else, even including the interior decorations, and furniture, is so low an amount that you will be pretty darn shocked.

How can people watch the film?

Well, while we recently did a private school screening to 500 heads, and had the film shown at the Ocean State Film Festival (it has been accepted to other festivals since), our very first PUBLIC screening will be at the Fuller Craft Museum in Brockton, Massachusetts on July 14th at 7pm. We’d LOVE to see some of you there and those that attend will get to tour the very truck that the whole film is about. There will also be a director’s QnA at the end, and you’ll also be granted admission to walk ALL the halls of the museum while you’re there.

It’s a real-deal full length film, complete with an original score and all, and if you don’t walk away with at least a handful of money-saving construction ideas from it I’d be VERY surprised! It’s 200% appropriate for ALL ages too.

People can find tickets for the film premiere (and/or can purchase a download of the film) by heading to http://www.BoxTruckFilm.com 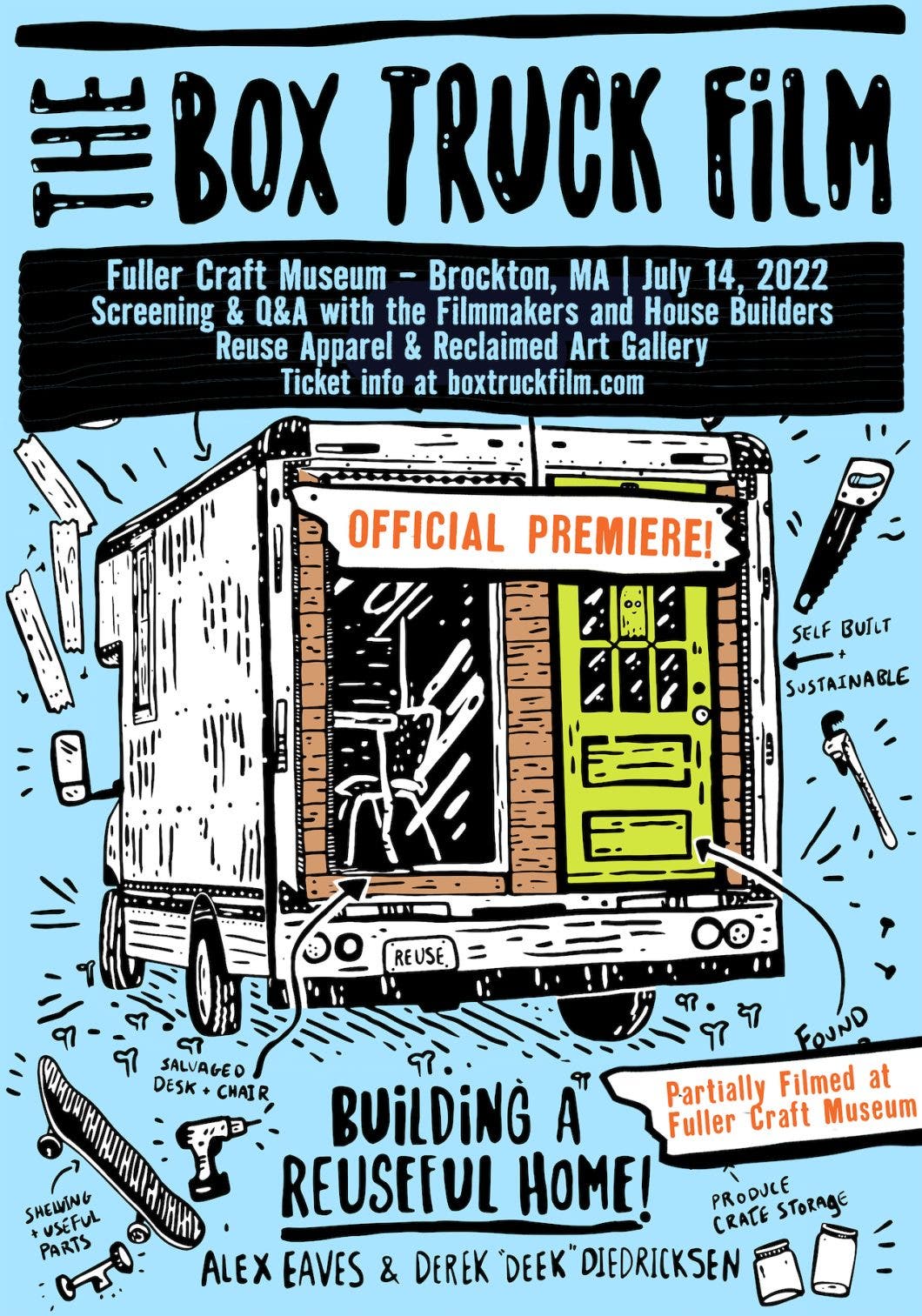