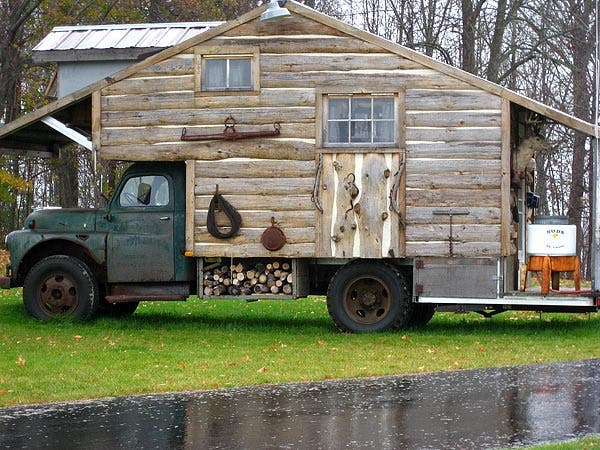 John Mitchell sent this picture to me and wanted to share it with the readers of the Tiny House Blog.

I dream of one day living in a tiny house and practicing sustainability. I’ve also been in love with the idea of traveling the continent and south america in retirement by RV. I had to share this great image taken by my aunt, Ruthanne McEwen, while visiting Nueske’s in Wittenberg, WI. My aunt and I both live outside Milwaukee which is about 3 hours from Wittenberg.

This tiny house/vehicle captured my imagination in both cases. I would be very happy if you could share this image on your blog. I WANT to see the inside of this precious house!

2018 just might have been the year of tiny house saturation, and I m okay with that. There are a number of HGTV shows on small space living, and every time you scroll through Instagram, it feels like yet another cute couple or family has decided to renovate a bus or RV or build a tiny house on wheels from the ground up and they ve completely killed it on the design plan and execution. So inspired by all that aplomb, we re rounding up 10 of the most stylish tiny house interiors from Instagram for your viewing pleasure. Who knows? Maybe 2019 will be your year to live large in a downsized space. And if that s the case, this story will surely come in handy.

Amazing on so many levels!

I agree with Suzi… the *inside* would be of great interest… such a deep looking character the outer exhibits!

John is hoping to get us some interior photos but it may not be for a few months. I will be sure and post them. If anyone else has any please email them to me. Thanks! Kent

Do a google image search on “house trucks” there are some really neat photos of others like these… some interiors too. Fun stuff.

If you go to Powells bookstore in Portland, Or, and search for “Some turtles have nice shells”, you’ll find a veritable dictionary of housetrucks and house buses, very similar to this one. It’s got loads of old grainy photographs from the 70’s and 80’s, back when housetrucks were a common sight on Pacific Coast backroads.

That is a cool looking camper truck, but i just wish every story didn’t have to have an eco-nut liberal spin on it. Some of us are living in tiny houses because of soo many over-reaching, unconstitutional, enviromental laws that have put us out of our jobs and homes. Sustainability means nothing if i am not allowed access to the life sustaining natural resources that my family needs to survive.

Can you try to post something constructive without calling people names?

without the environmental protections, your water would be polluted and your air too. Your soil could be full of heavy mettle that you would ingest through your food. So you wouldn’t even be able to homestead or farm, and you would be sick.
As I see it, it is unconstitutional for big companies to pollute the environment so that no matter where I go, I can not live off my toil and the land.
Most of us are trying to gain some measure of independence, which would not be possible with in a poisoned environment.

I’m sorry,
It was a knee jerk reaction. I’m not trying to start a discussion about that.
Its a really cool truck.

All I see is a blurb about some guy whose aunt took a photo of a great truck, so there isn’t even anything remotely political about the few sentences that make up the article. I don’t know why anyone thought there was any slant to it, and I would have “knee-jerked,” too. Plus, there’s a mounted deer head on the outside of the truck. That’s not exactly vegan conservationist.

There is a site somewhere with a bunch of trucks like these. I will look for the URL.

Here is the site:
http://www.mrsharkey.com/busbarn/busbarn.htm

Without those liberals, who are not nuts, by the way, the lumber companies would have clear cut every last tree in the country so that this guy wouldn’t have even been able to build this house, much less have kindling for his fire. Without those liberals, you’d be living in a company town without a penny to your name and without hope of the freedom to build a tiny house.

Without those liberals, who are not nuts, by the way, the lumber companies would have clear cut every last tree in the country so that this guy wouldn’t have even been able to build this house, much less have kindling for his fire. Without those liberals, you’d be living in a company town without a penny to your name and without hope of the freedom to build a tiny house.

Don’t want a fight? Don’t start one. Leave the insults out of it.

I hate firefox. Sigh. If only somebody would come up with a ‘tiny’ browser that didn’t chew up huge amounts of memory and load like crap.

Back on tiny houses, one thing I’ve been studying lately with a great deal of interest are ships’ interiors. They’re built to make every inch matter, and so they’re very satisfying to look at—and, I imagine, live in. Imagine if we built houses like that! If everything had its place, wouldn’t that have an effect on what you chose to have?

Tiny houses are so satisfying, I think, because they’re a refuge, and while you do your sleeping and some other things in there, you really step outside to do your living—-with other people, with nature, with work, what have you.

Also, did you guys know you can get books of plans of old bungalows from Amazon? The floor plans are amazing as a reference. Not quite as tightly-packed with useful spaces as boats, but that’s easy to fix.

Feeling a bit ‘Deliverance’ today are we, Patrick?

Oh, dear. Now that vision of poor Ned Beatty is in my head.

Sorry Irene and ginmar… but the comparison was inevitable…

To ease your minds I have spent some time in looking through old posts on ‘The Hermitage’ to find you some lovely interior shots of Rima’s former caravan… Enjoy!

I could not help myself.
http://www.youtube.com/watch?v=6dQSdCZuwME

I am afraid to look…

I will wait until daylight…

Keep up the “eco-nut liberal” spin! For some of us, it’s inspirational and down-to-earth.

That truck is incredible! I’m with everyone else on wishing the inside was accessible… for pictures and ideas.

Thank you for sharing, John Mitchell!

That’s awesome! If only I could see the inside.

How romantic and road wise too well back woodsy of course would not find that roaming the streets in Seattle of course unless its classic truck house show! Can one see the stars from the bed loft or is that just something one has to get a feeling for from time to time! Thanks for sharing your truck House with us! Could we get a peek inside the works? Love the ringer washer on the porch… is there room enough for the rockers! How about a attachment like slide out porches and a drop down picnic table as well or is that one on the side I see?

Good Lord I love that truck. I’ve seen this photo before and I still enjoy looking at it. Now there’s a Tini House I could live in. :O)

Now there’s a truck I could live in. LOL Good Lord I love that truck. I’ve seen it before and I still enjoy looking at it.

P.S.
It would be nice if this site were to remain about Tini Houses and not politics :O)

You are so right. Apologies for my part.

Just another note on plans and inspirations, there are a lot of books on shed building out there that show detailed drawings of how to build a shed of the same dimensions as many tiny houses. Not much interior stuff, but foundations and a shell are usually well shown, some even have material lists so you could get a fairly good idea of what it would cost you to build if you price out the list. My local library had several interesting books such as http://www.amazon.com/Black-Decker-Complete-Guide-Contemporary/dp/1589233352 and http://www.amazon.ca/Stylish-Sheds-Elegant-Hideaways-Destinations/dp/0307352919

No fear needed. It’s “Dueling Banjos,” not the other thing. I wouldn’t even look for that, let alone post it. 🙂

No fear wrrented. It’s “Dueling Banjos,” not the other thing. I wouldn’t even look for that, let alone post it. 🙂