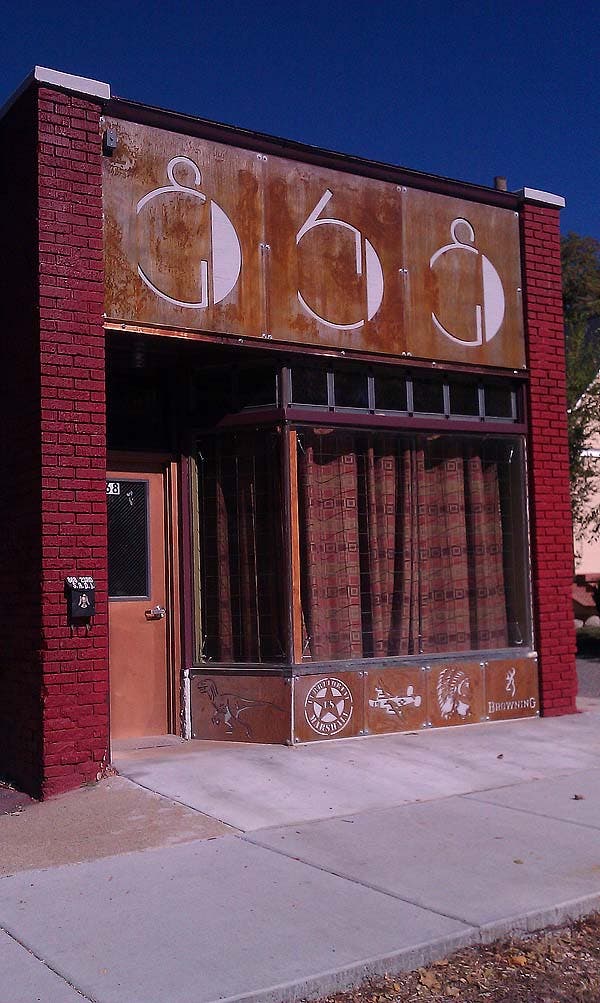 The following is not a tiny house, but it is creative use of a small space so I thought I would let Stew share it with you.

I thought that your readers might like to see the photos of a cool little project that we just completed. This is a little 780sq ft building in downtown Ogden Utah. The property is located in a rather run down part of town, which the city is really trying to improve. The area has all the trappings associated with urban blight, rampant drug use, gangs, crime…you name it, it has it! In fact, when a family member and I purchased the property, the front window had six bullet holes, the planter had hypodermic needles in the bed, the front door had been kicked in and the furnace was destroyed after vandals went in and ripped out the copper coils. – Interesting side bar, I still had to fight the city council on numerous fronts regarding my plans to renovate the property, much like most tiny home owners find when dealing with city hall!

I purchased the property with the intent of using it as my office, which I did for most of this past summer. Then when Maximus Extreme Living Solutions started to take off, I decided to sell the building since I had moved my office into our production warehouse.

The property once housed a small chiropractic office; the good Doc practiced there up and into his 80’s. After the project was just about complete, the former owner’s daughter and son-in-law stopped by and asked if they could come in and view the renovation. They were very complimentary and said that their dad would have loved what we had done to the place!

I would like to give credit to the commercial contractor that I hired on this project, his name is Mike Smith of Stature construction and he was fantastic to work with. I also used a gentleman by the name of Mic Allen to do the custom steel work that you see on the front of the building (I designed images that were consistent with Ogden’s past and used a 1930’s font for the street address of 868, that you see on the fascia of the building). Lastly, I’d like to credit my business partner on this project, my mom Sue, she is great to work with!

What Is Cozy Minimalism?

Art Deco is my favorite. The woodwork in the pictures on the last page are terrific. It’s rare to see this type of woodwork anywhere.

You got rid of the swanky numbers?!

No we actually added those numbers and the other cold rolled steel work. The building was built in 1930 and we used a 1930’s style font for the property address, to dress up the facia, while we incorporated the other pieces on the bulkhead to clean up that area. They were all cut with a computerized water-jet system. We incorporated items that were indicative of Ogden’s history, A B-24 bomber, that saw its hayday during WWII, they were serviced locally at Hill A.F.B., the Utah Raptor was discovered close by, a U.S. Marshalls badge from the 1800’s, an Indian Chief’s bust, The Browning logo and on the entry way a locomotive rendering (Ogden has a rich Railroad history, Promotory Point is just a short distance from Ogden). We installe the steel, then sprayed it with salt water to encourage the rusting process. The work was completed by a local artist named Mic Allen!!

“Will be looking to start a national sales team asap. Looking for aggressive salespeople. High commission income potential, all areas of U.S. and Canada. Contact Stew through Maximus Extreme Web-site ”

You’re not a builder, you are an investor Stew, quit playing the concerned small home builder.

I am a tiny home enthusiast, much like I am an enthusiast for alot of other forms of architecture. I actually put my money where my mouth is and engage in the process of building, restoring and creating something from nothing. I do it for several reasons; one is because I enjoy it; two… it can, at times be profitable and I do enjoy making money (I make no aplologies for my capitalist leanings); three… it is a challenge, there is a risk/reward relationship, that has a certain degree of excitement that is associated with the porcess.

I do enjoy the tiny home movement and consider myself to be a part of it. I don’t know you well enough to make an educated statement as to what you are or what you are not nor as to what you stand for or what you don’t stand for, nor is that my place to pass judgement on you. I’m just in the game, trying to make a living for me and my family and doing something that I enjoy, if you don’t care for it or me….that’s ok. No hard feelings here.

The only problem with this place is it is in Ogden, even before I read your description of Ogden I thought ‘Ewww’. I don’t think it is as bad as you make it out to be but people from Ogden are weird, and the whole city is covered in a layer of grime. If I had to describe people there I would have to say ‘well used’, everyone there moves slower because they’re broken down, even the teenagers that work at the fast food places seem run down.

Nice building though, too bad it is in Ogden.

Hey Stan, Ogden does have a certain…..”something” to it (some love it, other’s…..not so much). We (the community of Ogden) have made improvements, but obviously we still have a ways to go, but I get what you are referring to. As I mentioned in the article, this little building is in the heart of an area that really used to be just a terrible part of town, the city has really spent some money to clean it up….big improvement from what it once was! : )

When’s the last time you were in Ogden? (I mean that in a polite way, not rude or snarky, just wanted to clarify my tone). 🙂 I actually just moved here recently because I was drawn to its “edgy” charm. It’s kind of like the Portland of Utah. When I was a kid we called Ogden the armpit of Utah, but it has had a lot of great changes in the past 10 year. There’s room for more improvement.

Anyhow, one of the charms that drew me here were the number of vintage, small (not tiny, but small) homes available. There are a lot of art deco homes and buildings like this one. I bought a 1921 craftsman with a monstrous 1000 sq ft.

I hope we can get more development like this in town. Good job.

Very nice indeed! Thanks for sharing it. 🙂

Hey, nice job with this, I would love to see who or what business abides there in the future. It has a lot of character, would be a lovely small bar, pub or small eatery too.

I need to make one correction to the article, the contractor that was used on the project was Jason Smith, not Mike! My apologies to Jason!!!

I’m not sure, I just looked up font’s from the 1930’s (I mean I litterally did a “google search” and entered fonts from the 1930’s), then I just picked out that one. I should have written down the name…..sorry I couldn’t help more. However it wasn’t hard to find, I went back to it several times before I made a final selection, you should be able to find it fairly easily! Best of luck, Stew

How do we simplify? Let us count the ways. | Exopermaculture - January 9, 2013 Reply

Lol I noticed the changes to the building and wondered what was going on in the inside. I live close by. Ogden really isn’t as bad as all that. It’s shabby chic a lot of the time. There are a few blocks I would never want to live on but most places are just great. We are renting a 1926 home that was lightly remodeled in the 80s. Its a good deal for rent and the size but its far too expensive to keep warm. I am hoping we can take the tiny home route towards ownership.