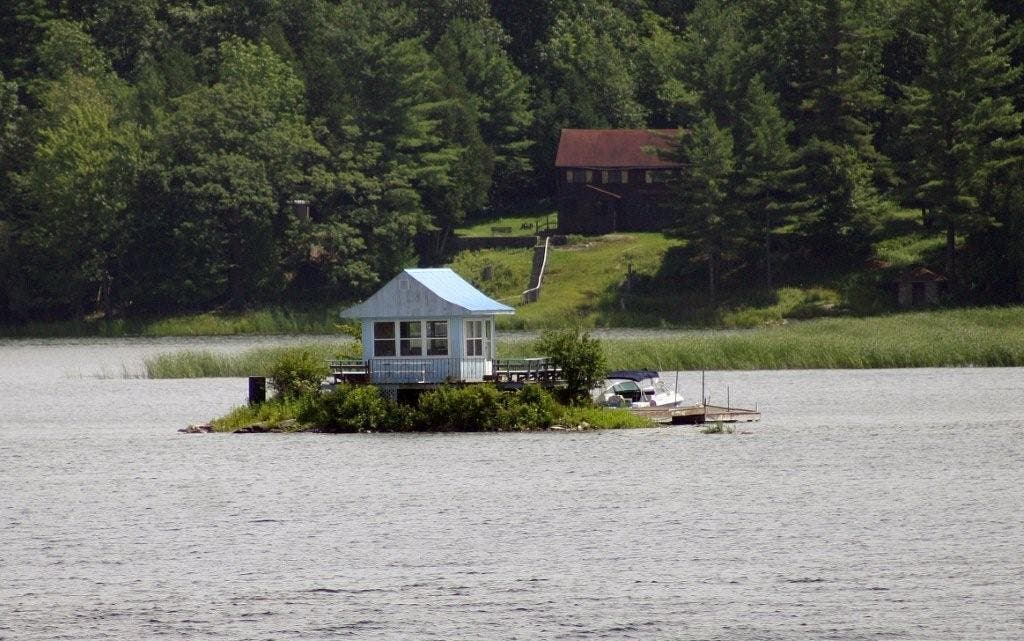 In celebration of Canada Day and the 4th of July, I thought I would do a post on the tiny houses of the Thousand Islands, which is the name of an archipelago of islands that straddle the U.S.-Canada border in the Saint Lawrence River as it emerges from the northeast corner of Lake Ontario. The islands, which number 1,793 in all, range in size from over 40 square miles (100 km2) to smaller islands occupied by a single residence, to even smaller uninhabited outcroppings of rocks that are home to migratory waterfowl.  This area is very popular among vacationers, campers, and boaters, and is often referred to as the “fresh water boating capital of the world”. The smallest of the inhabited islands is called “Just Room Enough” and only when the water level is low enough is there room for the outdoor furniture to be put out. Because of the beauty of the area and the romantic aspect of living on your own rock, these cottages are highly coveted and can run into quite a bit of money. However, many of these tiny homes and cottages can be rented for vacations. And most of them can be viewed while sailing the St. Lawrence. Erin Carey – Living and Working Tiny from a Boat

How great! We were fortunate enough to have friends who owned a cottage in 1,000 Islands when I was a kid and we spent many happy summers there. The house we stayed in had a boathouse that was on a separate little island- you crossed a long footbridge to get there- magical!

If I didn’t live in a floating cabin I would love to live on a tiny island. But I think “Just Room Enough” would make me a bit nervous when the water was rising. Thank you for sharing these great tiny (and large) cabins. – Margy

There is no tidal effect in the St Lawrence river the level does not fluctuate much at all. It is truly a beautiful area to live, even on the mainland, but it is not for the faint of heart as winter can be challenging. You must truly enjoy all four seasons.

[…] In other locations people have made entire villas from the limited land available to build on, such as the 23-room island home in Rhode Island (in the image above) or the modern four-story residence on Lake Michigan (pictured below – images via BusyBoo and TinyHouseBlog). […]

[…] or the modern four-story residence on Lake Michigan (pictured below – images via BusyBoo and TinyHouseBlog). Of course, not all buildings on tiny islands are homes – there are luxury resorts and […]

[…] In other locations people have made entire villas from the limited land available to build on, such as the 23-room island home in Rhode Island (in the image above) or the modern four-story residence on Lake Michigan (pictured below – images via BusyBoo and TinyHouseBlog). […]

Just room enough is adorable. The idea of a foot bridge to the boat house has merit too. Thanks so much.

The only problem would be getting groceries but otherwise I would love a place like one of these.

Groceries are no problem at all, spring, summer, and fall, you place your order online or by phone and pick it up at the dock, in winter you simply drive your snow machine to the store.

No, it essentially drains the Great Lakes into the Atlantic

[…] Not all island homes are residences of the very wealthiest.  The cost of building and maintaining a house on an island aside, some residences are truly tiny, occupy virtually all available land and are home to a wide variety of folk including the guy who just wanted a good place to fish.  Here’s a look at some of these smaller residences:  http://tinyhouseblog.com/stick-built/tiny-houses-on-tiny-islands/ […]