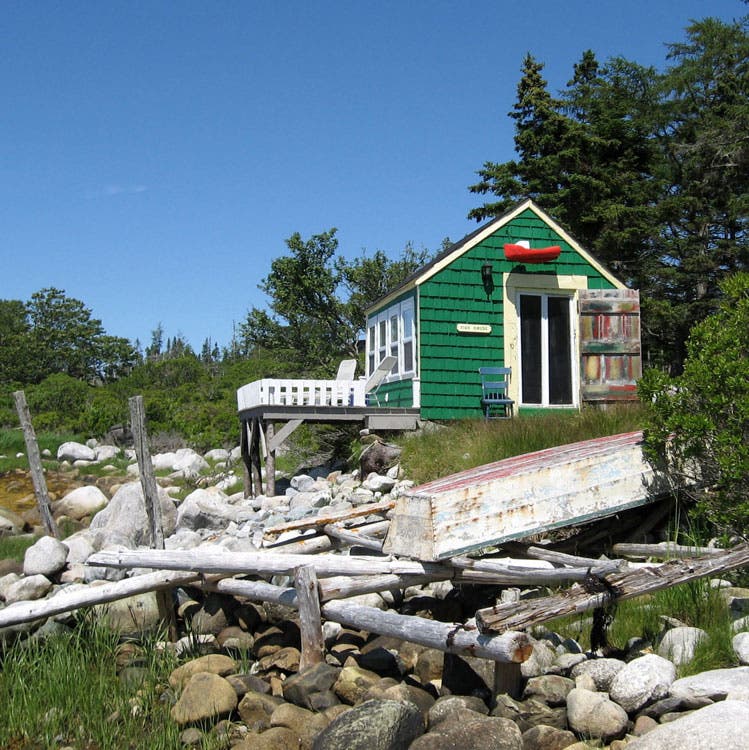 I stumbled across a recent post called the fish house. Anne and her husband live on a small island in Nova Scotia called McNutt’s Island. They live in a fisherman’s house on the island but there are also two fish houses on the island and one of them has been restored to be a guest house. I’m going to let Anne tell you more about it. The house we live in is the last old fisherman’s house left on McNutt’s Island. But there are two old fish houses that still stand. In the old days the fishermen used these sheds to repair their nets and their other fishing gear, and for storage.

It’s an easy tour since the fish house is eight feet by twelve feet. All you have to do is stand in one place and look around.

We discovered many interesting things stored here — lobster buoys, tools, doors, frames, furniture, oars, fishing poles, old lanterns, things like that. Some of these things have returned to the fish house. Now they are objects of art, or at least objects of interest.

Greg took up all the floor boards and sanded and polyurethaned them. He put down a sub-flooring of plywood before he re-installed the wood floor. He built a tiny french screen door. This door is so little that even I have to duck to get inside.

Speaking of ducking, we found these old silhouette decoys stored in the fish house when we moved here. They were originally black, of course. No ducks would be fooled by them now.

The desk was in the main house when we moved here. It may have once been the desk for the island post office.

There’s plenty of room for a queen-sized bed. Greg built a new window high on the north wall, above the bed. It opens and closes very cleverly.

To learn more go to Anne’s  Nova Scotia Island Journal. I think you will become addicted to it just like I am. Fish House View Out the Door This is so cute! Adorable places!!! We have a boat and it’s the same type of lifestyle. Your own little tiny place that is home.

The photos of the little white rooms are amazing – i want to move in!

Currently living in a huge ugly 1970’s ex-governmental house in Ghana, West Africa – i couldn’t be further way… but hey, that’s what blogs are for – entering the shared lives of others!

Great. Keep it up 🙂
Holli in Ghana

I will tell you this is the second time I have come across your blog and Im lovin it! I added your website to my rss reader. Cant wait to see more blog posts!

kind of interesting, but still has that old shack feel and look to it. that isn’t all that appealing to some..

My dad was originally from Nova Scotia. Quickie question. I did not see any stove in the pictures. What do you use to keep the cottage warm on cold Scotia nights?

Congratulations on re-purposing the fish house. I looks great!
Lots of folks in Nova Scotia, and all along the coast of the Maritimes have done similar things with old buildings. It seems to be a hot bed of re-innovation. You can travel almost anywhere along Nova Scotia’s 5000 mile coastline and see folks using old seaside buildings as cottages, camps and full time houses. It is worth coming to have a look!
Here is the NS Tourism site url: https://www.novascotia.com/en/home/planyourtrip/travel_guides/default.aspx