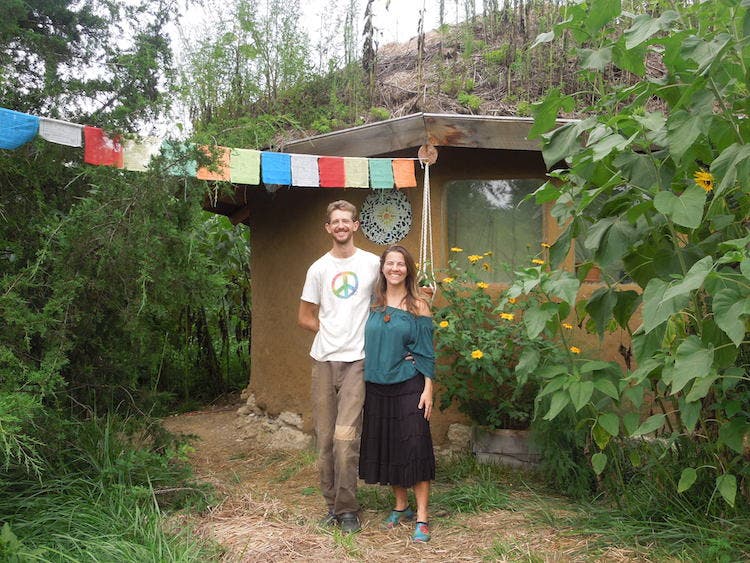 Tucked away on the wild margins of Dancing Rabbit Eco-Village  amidst a riot of herbs and flowers, the Hermitage is a much beloved home and sanctuary for Hassan and his partner Danielle, a shamanic practitioner, while they prepare to have children and pursue their vision of right-living using the model of ecological sustainability. It is a testament to the potential of natural building technology, made entirely of recycled, upcycled and locally harvested materials. The Hermitage rests on a gravel-filled trench embedded with a perforated drain pipe, which guides water away from the foundation and into the back garden. The gravel is capped with urbanite, (concrete rubble collected from demolition projects in the city,) allowing the foundation to stand strong with the use of only a single fifty-pound bag of Portland cement.

Repurposed wooden skids, (platforms used in the commercial shipping industry,) have been joined together with locally milled lumber to form an almost-round polygon that makes up the skeletal framework of the building, which was then infilled with upcycled rigid foam and light clay straw, (a mixture of dry straw and clay slip,) to insulate the structure. The walls are clad inside and out with heavy clay cob and finished with a paint-like plaster called an alis, which consists of finely sifted clay and cattle manure, all harvested nearby, with a dash of decorative pigment and linseed oil to harden it and improve its water-shedding capability. The walls have an R-value of 32. The overall interior floor space is 213 square feet of traditional earthen floor, but feels much larger due to the placement of furnishings against the walls, leaving ample room in the center for morning yoga practice and to work on projects throughout the day. The door is Hassan’s masterpiece in oak and walnut, studded with square iron nails forged by a local blacksmith. Five large bay windows on the west side of the structure invite natural light and warmth into the space.

Locally harvested wooden beams, taken from public land a few miles away by virtue of a permit available in Missouri, have been arrayed atop one another using a special technique called mutual reciprocity, which permits the ceiling to span the entire space without the need for interior support beams. To erect a reciprocal roof the first rafter is supported by a temporary central vertical post; the second rafter is then secured to the first, the third secured to the second and so on until the temporary support can be safely removed as the final rafter is put in place to uphold the first rafter in kind. This method of roof construction is both beautiful and robust, and can easily be experimented with using lumber scraps. (Hassan likes to throw together small-scale versions using 1” x 1” offcuts and stand on them as a proof of concept for visitors and interns who come to Dancing Rabbit to learn about natural building methods.) Recycled pallet-wood decking was installed in between the rafters to support the layers of materials that make up the roof, listed here in order of outermost to innermost: straw mulch, an EPDM pond liner, rigid foam insulation and cerulean blue fabric that mimics the sky and gives the space a splash of color without the need of toxic paint. This assembly of materials provides an R-value of 70.

“Originally, I was going to install a dome skylight,” Hassan told me in reference to the majestic ring that crowns the center of the ceiling, made up by the interlaced rafters of the reciprocal roof, “but I realized that I would be covering it throughout most of the year in order to avoid heat gain in summer and heat loss in winter, so I ultimately decided against it.” “One of the advantages to this method of natural building,” Hassan told me with proud exuberance, “is that I don’t have mold problems, unlike some more air-tight homes in the area that are built using conventional methodology. Clay absorbs excess moisture from the air and releases it again when the air is dry – this prevents water from pooling, which could lead to mold growth that can prove unhealthy for building occupants.” “A problem I encountered in our first winter,” Hassan went on to explain, “is that the door is facing east, the direction from which most of the storms in this region come. There were times when we would open the door and snow would blow directly inside. To solve the problem, I built a portable copula to shield the door and give us a place to take off our shoes before coming inside. We also use it to shelter firewood, which I hadn’t given much prior thought in the rush to make the structure habitable before winter set in. If I had been more familiar with the characteristics of our area, I might have oriented the door differently, though I like having the entryway hidden from the road and overlooking the trees and foliage in my back garden. In summer we remove the copula so we can enjoy the full view throughout the warmer months.”

Winter heating needs are met by the use of a cast iron wood stove, purchased from a neighbor for a whopping $25 – the family burns about two-thirds of a chord of firewood each year to maintain an interior temperature in the 70s. A custom window serves for summer ventilation. It can be articulated in various ways, sometimes opened just a few inches, other times opened wide, or even removed from the wall altogether. When I visited Hassan at the Hermitage, I was struck by the building’s abundance of personality. The interior of the space is filled with scores of pictures and works of art, colorful geodes and various elements of nature. To me the building resonates in a way that I associate with the sacred spaces of our remote ancestors, like the great halls of the Stone Age Fertile Crescent with their hand-sculpted busts of clay, or the ornately plastered tenements of Çatalhöyük. Careful design and creative intention have transformed this humble homestead into a temple that honors the spiritual dimension of the mundane.

“Symmetry is very important to me –” Hassan explained while I spent some time looking at the many unique artifacts arranged on the custom oak shelves he embedded in the cob walls, “like the way the vent window is placed directly opposite the door, then flanked by bay windows, colored glass, sculptural tree branches and so on, one side mirroring the other.” A particularly special piece is a stained glass window supplied by a roommate, Amanda, who once lived in the Hermitage with Hassan and Danielle. “The three of us built this place together when we first arrived at Dancing Rabbit. We split the cost of the building three ways. Out of pocket, we spent around $3500 for materials, a grand of which was needed to connect to the local power grid, with another $750 used to buy the pond liner for the roof. Natural buildings have a reputation for taking a long time to complete, but I only spent about four months building the Hermitage. Of course, I had experience apprenticing with other natural builders before I began construction, and I had help from a work-exchanger for a brief time, but this was the first occasion I had to combine all my skills in one project.”

Hassan guided my attention to a series of porthole windows that stud the eastern wall, “I made them using slices of a rotten, hollowed log I found nearby, along with some broken glass that was abandoned in our community machine shed – they only took about half an hour of my time to make, but have turned out to be one of the most cherished features of the house. In the morning, Danielle and I will lie in bed and watch the sunrise, and at certain times of the year the sun will shine through and cast beams of light on the walls, signaling to us the changing of the seasons.” The Hermitage is but one of the many wonderful sustainable buildings in Dancing Rabbit Eco-Village. We are hosting visitors throughout 2015, when guests are invited to come and learn about the ways we are modeling an ecological lifestyle to help prepare our society for the realities of anthropogenic climate disruption. If you like this sort of thing, check out our visitor schedule and consider marking some time on your calendar to pay us a visit – Hassan is an excellent tour guide, and I’m certain he would love to show you around! Check out his business website Cob Wall Builder: http://www.cobwallbuilder.com/ If that house can withstand a Midwestern winter, then I’m very impressed. But…this might seem a silly question, but…what’s it smell like inside, with clay walls and earthen roof and so on? Doesn’t the roof get mold in it?

Earth buildings have a wonderful natural scent…at least in the high deserts where I am accustomed to residing in them. This is a magnificent example of cob…very well done!!!!

Outside is creative. Roof structure is amazing, but was the inside done when these pictures were taken? Pretty barren and cold looking.

You guys are doing a wonderful job.

[…] Hassan’s self-built natural home cost a bit less than $5000 to put together, including materials, electrical installation, major appliances and some occasional hired help, but excluding his own labor. […]