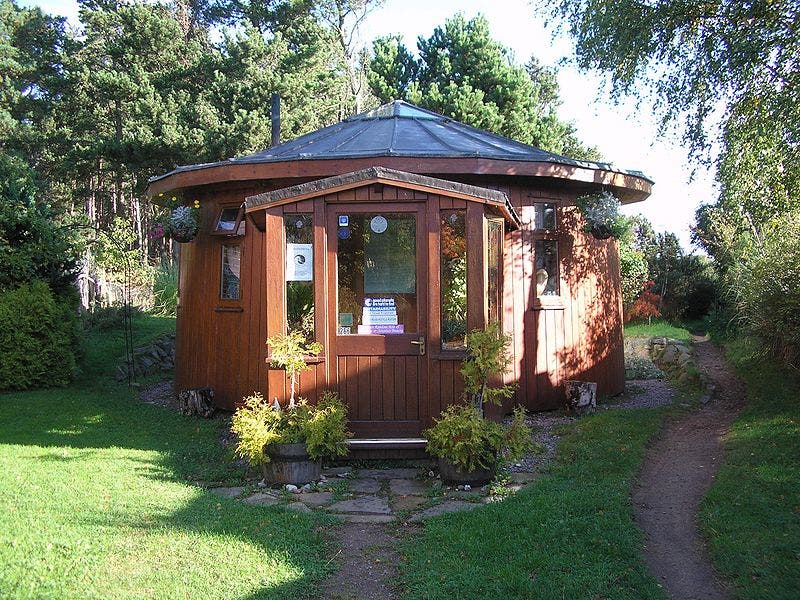 The Findhorn Foundation near Forres in Scotland is a spiritual community, organic farm international center for holistic education. It is known around the globe for its sustainable living, ultra small carbon footprint and its legendary vegetable gardens. It is also known for its eco-village and within that village, several round houses made out of recycled whiskey barrels. The cluster of whiskey barrel dwellings overlook organic vegetable gardens, dancing wind turbines and the sandy dunes of the North Sea’s Moray Firth. More than 40 houses of ecological design can be found at the Findhorn eco-village including a guest lodge and youth building with turf roofs, straw bale houses and earthships using recycled car tires. Near the entrance to the village is an old tin caravan bearing the Gaelic name Tír Tairngire (in English, “the promised land”). What is now The Findhorn Foundation and Community began in 1962, when co-founders Eileen and Peter Caddy and their friend Dorothy Maclean set up home at Findhorn Bay Caravan Park, on the coast of Scotland. The three hadn’t planned on setting up a community, but they shared an interest in spiritual life and their skills as gardeners attracted international visitors. Some liked it so much they decided to move in.

This peaceful community of 700 people is comprised of herbalists and healers, poets and potters, educators and experts practicing sustainable professions. They live on modest incomes, but they enjoy the fruits of their shared wealth with daily gourmet vegetarian feasts, traded talents and skills, awesome scenery, beautiful buildings, and a flourishing arts scene all part of life in this community. They also sell much of their wares including organic vegetables, homemade bread, beer, cheese, chocolate and even vodka. The community even has its own bank and community currency called the eko.

The community also has its own natural sewage treatment facility, called the Living Machine, which breaks down sewage with an ecological method using bacteria that live on plants contained in large and deep water barrels. The Living Machine is the first of its kind in the United Kingdom. These homes are just lovely. Findhorn is a marvelous place to visit.

Oh, Findhorn! It’s been just over a year since I was there. I lived just around the corner from the little whiskey barrel houses. The double barrel has a cozy office/living room upstairs with a great little nook off to one side. Apparently, they smelled like whiskey for several years after they were built.
And I think the community’s more around 300, but I guess it depends on how you’re counting?

Shouldn’t it be “whisky” barrel houses and not whiskey. Just an assumption on my part since the homes are in Scotland and the Scots are known for making Scotch whisky, not whiskey. Sorry, just the old newspaper editor in me.

That sounds amazing. I want to live there. Think it is as idealic as it looks?

Maybe there is some other similar places? Somewhere with sunny weather. 🙂

Never mind, I just looked more closely and see now that it does match the middle house in the second photo.

[…] planning to build a house on Gabriola, and we’ll help. Here’s the plan: build a house made out of recycled whiskey barrels. To begin, order lots and lots of whiskey. We’ll do the difficult work of drinking the […]

I read a book about Findhorn decades ago and found it very inspirational; it has influenced much of my own life. I could not remember the name so googled organic farms in Scotland and was overjoyed to find Findhorn was alive and well. i have a young relation who wants to set up a commune, and am referring him to your website.

I plan on living there in my winter years.

magine a world where organic farming is the leading form of agriculture. A world where everyone-from all income levels and geographic locations-has access to food grown without chemical pesticides and fertilizers that have been linked to myriad diseases and disorders. A world where instead of just a few agribusinesses getting rich off selling chemicals and chemically grown food, farmers thrive economically while they also help improve the health of our fragile ecosystem. Where the need for millions of pounds of toxins is eliminated keeping them from entering our water, air and soil. A world where agriculture and nature exist in harmony providing healthier food for everyone.-